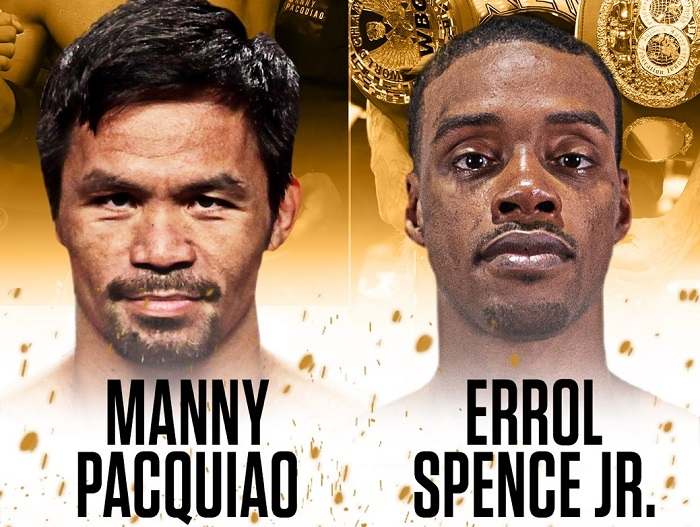 Manny Pacquiao and Errol Spence are set to step in the ring on August 21 for the 12-round welterweight title fight. Pacquiao vs Spence Jr Date, Venue, Tickets, Live Stream, Odds, Stats And More

Latest News on Pacquiao Vs Spence Fight: The legendary boxer says that Spence is better than Mayweather and do not need the advice to fight with me. Manny Pacquiao is confident winning against Errol Spence Jr and proving his legacy as one of the greatest boxers of all time. Experts believe Manny Pacquiao is the underdog in the fight but can do an upset against Errol Spence Jr.

Pacquaio took Twitter to confirm the fight “Pacquiao vs Spence”, and the date for the boxing match is set for August 21, though a venue has not been decided. The 42-year-old took on unified welterweight champion Thurman Spence, considered one of the best boxing’s pound-for-pound boxers.

Pacquaio has won his last three fights. He defeated Keith by a split decision,  Adrien Broner by unanimous decision and Lucas Matthysse by a technical knockout.

On the other hand, his opponent Errol Spence has not faced defeat in his career. He has a record of 27-0. Out of 27 fights, he has won 21 fights by knockouts.

Here’s everything you need to know about the Manny Pacquiao vs Errol Spence boxing fight, including start time, PPV price, tickets, location and betting odds.

Spence defeated Danny Garica in his last fight by a unanimous decision to retain his WBC and IBF welterweight titles. This will be the first encounter between them. Errol will have the height advantage. Pacquaio needs to find ways to cope with height differences.

Errol Spence is expected to retain his title against Manny Pacquaio. And one of the reasons is Manny Pacquaio has come past his prime, while on the other hand, Errol is in his prime. His unbeatable record is impressive and gives him the upper hand against veteran Pacquiao.

When is the Manny Pacquiao vs Errol Spence Fight?

The date of the Manny Pacquiao vs Errol Spence boxing fight is Saturday, August 21, 2022. The pay-per-view will be broadcast on Fox starting at 8 p.m. ET (5 pm PT).

Where is Pacquiao vs Spence Taking Place?

The fight venue is announced, the fight will take place at the T-Mobile Arena in Las Vegas, Nevada.

How to Buy Pacquaio vs Spence Fight Tickets?

Pacquaio vs Spence fight tickets are on sale, the boxing fight tickets can be purchased from AXS and the T-Mobile Arena’s official website.

Fans can watch the live-action of the Pacquiao vs Spence fight via pay-per-view through Fox Sports’ Premier Boxing Champions. However, the pay-per-view for the fight is yet to be released.

How Much Does Manny vs Errol Cost?

Apart from the television broadcaster, Manny Pacquiao vs Errol Spence fight live streaming will be available on Fox’s PPV in the USA.

The betting odds on the fight will be updated soon as we get close to the Manny Pacquiao vs Errol Spence fight date.

The actual earnings of both the fighters have not been released. But, it is believed that Errol Spence is expected to get his biggest paycheck from the fight.

On the other hand, Manny Pacquaio earned around $20 million from his last fight with Thurman. It is said that he will receive more money against Spence.