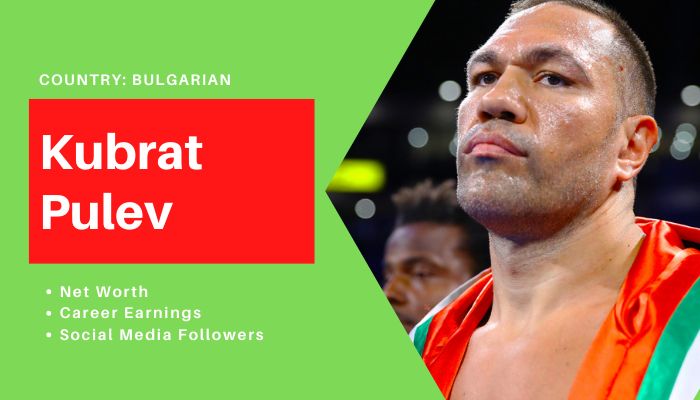 Bulgarian Professional Boxer Kubrat Venkov Pulev was knocked out by defending unified world heavyweight champion Anthony Joshua in the ninth round of their Championship bout on 12th December 2022. Although The 39-year-Old Bulgarian didn’t come out victorious in the fight, he took home a purse payout of around £3 million, while AJ, the champion, received around £10 million. The fight increased the Kubrat Pulev’s net worth to $11 million.

After his recent loss, Pulev boasts a professional boxing record of 28-0-2 with 14 wins by KOs.Between 2012 and 2016, Pulev won the European Heavyweight title twice. Kubrat Pulev, also nicknamed ‘The Cobra’ was born in Sofia, the People’s Republic of Bulgaria, on 4th May 1981.

Kubrat is currently ranked 10th on the world’s best active heavyweight boxers by The Ring magazine and ranked ninth by the Transnational Boxing Rankings Board.

Kubrat once received several lucrative financial offers to represent Germany, which he rejected, seeing it as a matter of his principles not to change his national citizenship.

Pulev currently holds a promotion deal with Top Rank Promotions, which helped his earnings increase to $4 million a fight from $1.2 million a fight. According to trustable sites, Kubrat Pulev’s net worth is around $8 million and might increase to $11 million after his fight with Anthony Joshua.

Much of the cash was won from some of his major boxing fights, with boxers like Klitschko, Derek Chisora, Hughie Fury, and now Anthony Joshua. Pulev’s Highest purse winnings are

In April, Pulev said that he would donate half of his purse to health workers in the midst of the COVID-19 pandemic. “I will give doctors, nurses and hospitals the necessary equipment to deal with this devilish virus,” Pulev promised.