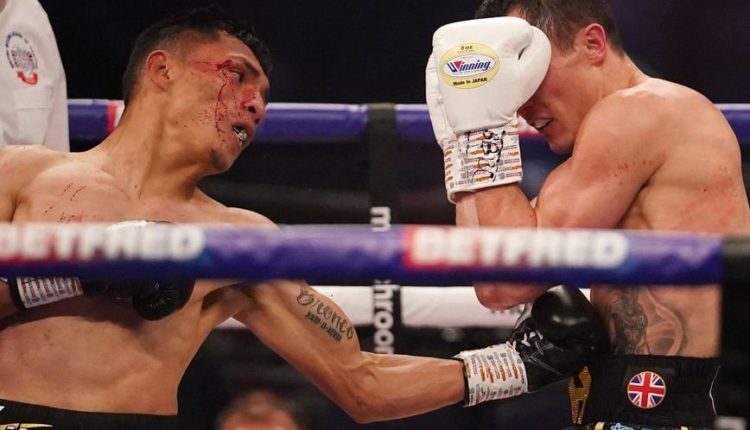 Josh Warrington and Mauricio Lara met again in the rematch on Saturday. They last faced each other was back in February of this year. The Mexican, Mauricio Lara dominated and won the fight. It was Warrington’s first defeat of his professional career. The pair will meet again and it would be interesting to see whether Lara’s win in February was a fluke or the Mexican is a real deal. Other than this, the card will also feature undisputed women’s lightweight champion, Katie Taylor, defending her title against Jennifer Han.

Josh Warrington vs Mauricio Lara 2 Highlights: Both fighters were looking in good shape in the first round and fans were enjoying the fight. Then, Lara met with an accidental clash of heads with Josh Warrington that resulted in a terrible cut above his left eye in the second round of the rematch.

Lara got the treatment after the second round but later it was declared by the doctors that he was unfit to fight and referee Steve Gray draws the fight on technical grounds. To make a decision, the fighters must complete four rounds, but in this case, it was just rounds.

So it was not possible to make a decision and the bout ended on a bad note for the fans in Yorkshire who were supporting home favourite Warrington.

The event featuring Josh Warrington against Mauricio Lara and Katie Taylor defending her title against Jennifer Han will take place on 4th September 2021. The venue of the fight is Emerald Headingley Stadium in Leeds, England. The timings are 2 p.m. ET | 11 a.m. PT. However, the main is expected to start at 5 p.m. ET | 2 p.m. PT (approximate).

You can watch the complete highlights video of Josh Warrington Vs Mauricio Lara, Taylor vs. Han on DAZN’s YouTube Channel.