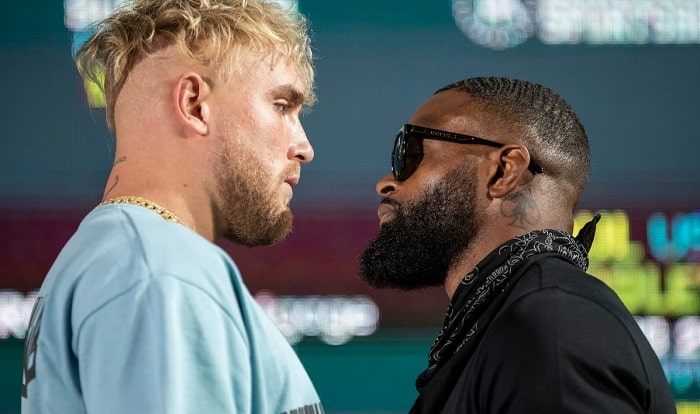 jake paul vs Tyron Woodley Fight Purse: how much money will fighters Make?

Jake Paul vs Tyron Woodley Purse Payout: Let’s take look at how much two fighters could earn from the fight:

Both fighters are new to professional boxing. However, Jake Paul has experience of four fights. Tyron Woodley also has a huge experience in combat sports. As per the experts’ and fans’ opinions, Jake Paul is the probable winner of the fight.

Based on our analysis, Jake Paul will pocket a guaranteed purse of $1 million and total earnings from the fight to reach $2 million, but all depends on the pay-per-view figures. At the same time, former MMA star Tyron Woodley is guaranteed to get a paycheck of $500,000 along with a share of the pay-per-view revenue. The fighter total estimated payout is expected to be around $1 million.

The former UFC champion agent in his recent interview talked about the Tyron Woodley fight purse. He didn’t mention the exact figure, but, he said, this is one of the best deals he has done. Tryon Woodley will be getting seven figures from the fights. As per the reports, a million is guaranteed.

The Jake paul fight purse is yet to be confirmed by the official. However, Jake Paul earned  $690,000 for his fight against Ben Askren. Triller promoted his last fight, but he is expected to earn more than his last fight since he signed a new deal with Showtime. As per the sources, the fight purse for Jake Paul can go up to seven-digit figures.

Woodley’s manager admitted that Paul will pocket a higher chuck of the PPV sales and would be his highest-earning in the sport to date.

In his light fight, Paul received the payout of $690,000 against Bellator and UFC champion Ben Askren. Here’s the fight card for tonight’s fight between Jake Paul vs Tyron Woodley.

As per the oddsmakers, Jake Paul has the upper hand and is favourite to win the fight with -130 odds, while Woodley opened as a -110 underdog.

As per the sports betting odds, Paul currently sits at -155 odds while Woodley has moved to a +125 underdog.

Jake Paul has won all three fights in his professional boxing career. He has won 2 fights via knockout and 1 via technical knockout. The 24-year-old has been making his presence felt in the boxing world. In his last fight, he defeated former MMA star Ben Askren via knockout. Jake Paul’s confidence is boosted up.

On the other hand, Tyron Woodley will be making his professional boxing debut after spending 12 years in the Ultimate Fighting Championship (UFC). His last fight in the UFC was in March at UFC 260 that he lost. Tyron ended his UFC career with a fourth consecutive defeat.