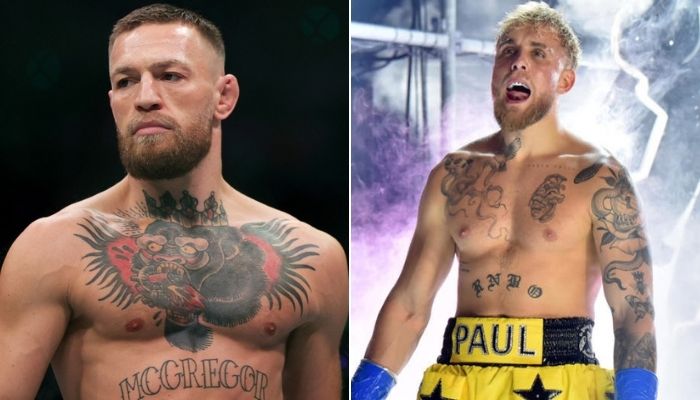 Jake Paul vs Conor McGregor fight could happen, Talks are underway for a mega-money fight

Jake Paul vs Conor McGregor fight date and venue: Youtuber turned professional boxer Jake Paul is planning to follow his brother Logan Paul footsteps and talks with fighting veteran Conor McGregor. Before that, his brother has fought legend Floyd Mayweather in the exhibition match. He said his team is in contact with the Conor McGregor team, and soon the things will be finalised. Conor McGregor recently faced defeat against Dustin Poirer and also got injured. He is expected to remain out for at least a year. He broke his leg in the first round itself.

Jake Paul said, “I think it will happen. Look, I mean, I’m the money fight for Conor McGregor right now”. He further added, “There is no other fighter right now who is on a bigger level than me that is calling out Conor McGregor and wants to fight Conor”.

However, the Jake Paul vs Conor McGregor fight is yet to be confirmed, but Jake Paul has already started the trash talk. He commented on Conor’s defeat against Dustin Poirier at UFC 264. He called the Irishman “piece of shit”. Paul also made a $100,000 necklace to mock McGregor for his broken leg. “I think the fame, the money has got into Conor’s head”, he further added.

Conor McGregor will not be returning to action any time soon. The injury sustained by him during the fight is a serious one. McGregor claimed he had stress fractures before the fight. He got them in the training camp. UFC President Dana White has also revealed that Conor has long-term issues with Chronic Arthritis, which has also hampered his career in the past. Dustin Poirier also commented and said he thinks these are all just excuses, and he was the better fighter amongst the two.

The problem for Conor McGregor has escalated. The former two-weight division champion has slid down the rankings to #9 after Islam Makhachev’s victory over Thiago Moises.

With the Irishman out for almost a year, he can further slide down in the ranking. Moreover, if the fight between Jake Paul and Conor McGregor is confirmed, tPaul must wait for a year to fight McGregor.