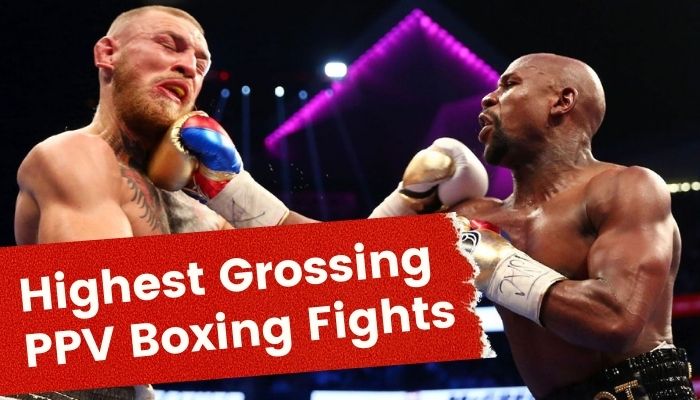 The first pay-per-view (PPV) boxing match was held between the legends Muhammad Ali and Joe Frazier in 1980. After that demand for PPV boxing increased. Today boxers want both high PPV fights and titles and some of them succeeded in this. Basically, PPV means a per person payment by a viewer for a particular event that is broadcasted.

In the game of Boxing, the boxers like Canelo Alvarez, Pacquiao, Mike Tyson, Floyd Mayweather are more than a celebrity of the boxing dynasty. However, there are two Boxing Legends who stand tall above all the other boxers in the world.

Let’s take a look at the top 10 highest-grossing PPV boxing fights of all time which broke all previous boxing records.

Floyd Mayweather broke his own record from the Mayweather vs Canelo Alvarez match played on September collecting $150 million from the PPV revenue. As history Got Created in the World of Sport when Mayweather vs Pacquiao confronted each other and the Figures were extremely sky high.

The Mayweather vs Pacquiao Match Earned a PPV revenue of $410 million which no other PPV Sports event has ever earned.

Floyd Mayweather vs Manny Pacquiao is the highest grossing PPV boxing fights of all time. The fight was headline fn all the big and major medias in the world. Floyd Mayweather the Professional American Boxer grabbed $200 million from this fight whereas the Philippines Professional Boxer Manny Pacquiao bagged a staggering $100 million from this Match.

The Pacquiao vs Mayweather record-breaking boxing Match took place at the MGM Grand Garden Arena, Las Vegas on 2nd May 2015 became the highest grossing PPV boxing match of all time. With a world record margin with over 4.6 million, PPV buys creating an overall revenue of $400 million in PPV revenue.

Mayweather won the Match by unanimous decision scoring it 116–112. This Fight is considered as the most exciting and Anticipated boxing Match of All time so far. The fight also set the new record for gate-receipt of over of over $78 million. Mayweather-Pacquiao surpassed the previous PPV record set by Mayweather-Alvarez fight back in September 2013 which sold over $2.8 million PPV generating around $150 million in revenue.

Mayweather vs Pacquiao is also the worlds most pirated match event ever watched illegally through various pirated live stream sites. After this Unbelievable Hit for Business Boxing Match, both Floyd Mayweather and Manny Pacquiao aren’t seen with the boxing gloves.

The world’s second highest-grossing and the most-viewed PPV boxing event is Floyd Mayweather vs Conor McGregor. The revenue earned through the PPV was $410 million.