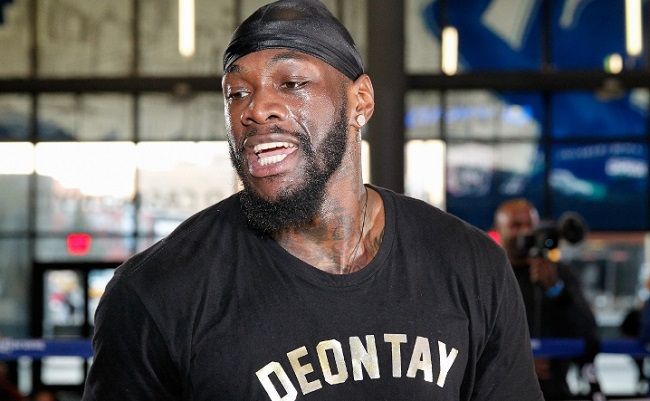 Deontay Wilder is a Professional Boxer and the former World Boxing Council(WBC) heavyweight champion and also popularly known as “The Bronze Bomber”, the name he picked up after he won a bronze medal at the 2008 Olympics. According to reports, Deontay Wilder net worth is estimated to be around $30.5million.

Deontay Wilder has had a fantastic career so far, he held the WBC heavyweight title from 2015 to February 2022, when he lost the rematch against Tyson Fury. Wilder has had a draw and only lost once, both to Tyson Fury in his 43 fights as a pro boxer.

It was in 2005 when the Alabama resident was inspired to pursue a new line of work to take care of his first child’s medical needs, and after dropping out of college, he tried boxing. By 2008, Wilder bagged a bronze medal at the Olympics and kept up the momentum, creating a record that was 30-0 by 2013.

Wilder blames his heavy Ring walk outfit worth $31,000 for tiring him before his face-off against Fury. He demanded a rematch to retain his title, and will deservingly get a rematch against Tyson Fury for the WBC heavyweight title.

Wilder earn ($2.5 million to $4 million) guaranteed purse money per fight. While his winnings include $10m (£7.71m) from the first Fury fight and purse money of $7m from his 2nd Fury fight.

According to Forbes, Deontay Wilder’s net worth is estimated at $30.5million in 2019. Deontay’s match winnings have totalled to $46 million. This made Wilder third wealthiest boxer behind Saul’ Canelo’ Alvarez and Anthony Joshua.

Deontay Wilder has a sponsorship deal with Everlast and recently partnered up with Premium Hydration Beverage RECOVƎR 180° as his hydration sponsor. The 6 foot 7 inch American had also rejected DAZN’s multi-fight offer worth $100 million. He doesn’t have many big endorsement deals but makes around $500,000 from endorsements each year.

Deontay Wilder has 2.9M followers on Instagram and 692K followers on twitter, his training and business team is called the Bomb Squad.