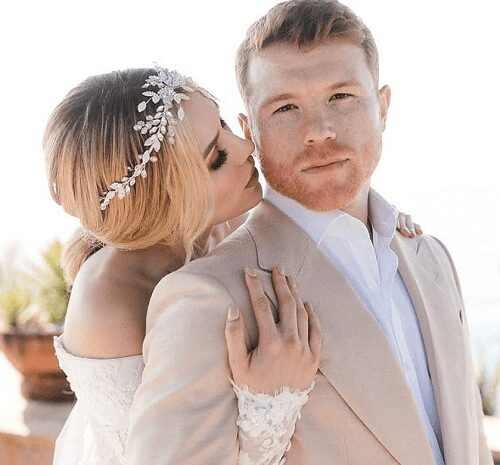 Who is Canelo Alvarez’s wife, Fernanda Gómez? All We Know About Her

Just after few days, Canelo Alvarez beat Billy Joe Saunders for the middleweight title at WBO. The news came out that Canelo Alvarez got married to his long term girlfriend Fernanda Gómez and the internet went buzzing to know about his wife.

On 15th May 2021, at a luxurious wedding the couple Canelo Alvarez and Fernanda Gomez exchange vows. The World Boxing Organization (WBO) also wished the couple on their marriage on an Instagram post.

Stephen Fulton vs Brandon Figueroa Live Stream: How to Watch…

Fernanda Gómez is a social media celebrity. She has around 885k followers on her Instagram account. Fernanda is a model, a businesswoman and promotes her products via her social networks.

Fernanda Gómez also owns a Nail Salons “Fernanda Gomez Nailbar and Boutique.”, in Guadalajara, which was set up in April 2019.

She has just over 49,000 followers on her Nailbar & boutique Instagram page. There she advertises and provides services and discounts on the Jelly Spa, pedicures and clothes sales.

She often posts pictures with her daughter and Canelo showing her affection for them.

How did Canelo Alvarez meet his wife Fernanda Gómez?

Canelo Alvarez met his wife Fernanda Gómez back in 2016 at the OMB charity gala. Afterwards, they were in contact and started seeing each other. The couple also has a daughter, Maria, together. Unlike Canelo’s previous relationship, very little is known about his relationship with Fernanda.

Fernanda Gomez has made several appearances with Canelo Alvarez and was also present on the ringside when Canelo fought Gennady Golovkin in an epic battle. She has had a role in some of Alvarez’s finest performances and remains a rock of support for his boxing career.

Stephen Fulton vs Brandon Figueroa Live Stream: How to Watch Boxing Fight in the UK,…