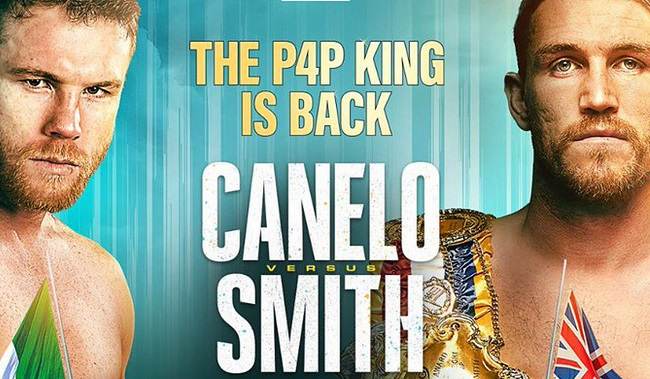 Canelo Alvarez vs Callum Smith: Everything To Know About The Fight

Matchroom Boxing is back with another nail-biting fixture as this time it’s the Mexican sensation Canelo Alvarez who will be taking on the undefeated Callum Smith. Ahead of the big fight, here’s Canelo Alvarez vs Callum Smith date, fight timing, venue, tickets, live stream, TV channel, stats and everything you must be aware of their bout.

Canelo Alvarez will take on Callum Smith on 19th December 2022 for the WBA (Super) and The Ring Super-Middleweight Titles. The match will take place in Texas, United States. However, the arena for the match is yet to be finalised but one thing’s that’s been finalised is that it will be broadcasted live on DAZN in the United States.

The date has been confirmed for 19th December and it will be the first fight of the year for both Canelo Alvarez and Callum Smith. While the arena for the event would be soon updated but the venue is confirmed to be Texas.

The Broadcasting for the event will be covered by DAZN and the bout is promoted by Matchroom boxing and the fight would be live-streamed to the audience.

But the sad part is that the fight would take place behind closed doors. Boxing fans can sign up to watch Canelo Alvarez vs Callum Smith live stream online with DAZN, the sports streaming service is available in the USA, Canada, Germany, Austria and many more countries.

But you must be wondering how can 2 boxers hold the same title? Well, to clear your doubts, there are 3 types of WBA super middleweight championship and the champion of each category is as follows.

Thus the title which is on the line for this fight is the “Super” Super middleweight championship which makes Callum Smith the defending champion in this bout.

Caleno Alvarez who is the best Mexican boxer in the world right now will be fighting the 57th bout of his career.

The only loss of his career came against Flyod Mayweather Jr.

The Britisher Callum Smith who will be facing his 28th fight against Caleno Alvarez is yet to be defeated in his professional career.