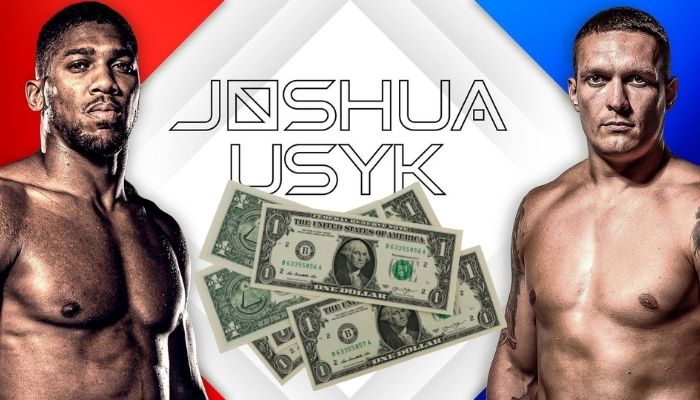 Anthony Joshua vs Oleksandr Usyk purse, salaries: How much money will they make in the Fight?

One of the biggest heavyweight division fights of 2022 between Anthony Joshua vs Oleksandr Usyk will be taking place on September 25 at Tottenham Hotspurs Stadium. Both boxers are experienced and considered as one of the best in the heavyweight division. Plenty of details about the fight are yet to be released by authorities. However, the Anthony Joshua vs Oleksandr Usyk purse payouts are out, and the estimated prize money of the two fighters are massive.

According to reports, Joshua is set to get a guaranteed £10 million from the fight. This figure is still unconfirmed, but if reports are believed, the British world champion will earn around $50 million as pay-per-view numbers are expected to be higher due to his star power. He is one the most popular British boxer in the world and deserves to get a significantly higher share than Usyk.

The total payout, including the PPV revenue share bonus of Anthony Joshua and Oleksandr Usyk, will be 50 million dollars and 15 million dollars, respectively.

As per Online sportsbook Bovada betting odds of the fight,  Anthony Joshua is the -260 favourite while Usyk is the +190 underdog. In order to make $100 with a Joshua winning bet, one needs to bet $260 on Anthony Joshua. On the other hand, if someone has placed a $100 bet on Oleksandr Usyk and wins the fight, one would be getting $190.

Both boxers are talented and one of the best in the field. Despite that, Anthony Joshua has the upper hand over the Ukrainian. He is the clear favourite to win the fight and retain the  WBA (Super), IBF, WBO, and IBO titles. Usyk is a dark horse in the heavyweight division. This would be one of the biggest challenges for his career.

The venue of the fight has been decided as Tottenham Hotspur Stadium. The stadium has a seating capacity of almost 63 k people. However, it is yet to be decided whether how many fans will be allowed inside the stadium.

What is Anthony Joshua’s net worth?

According to the Sunday Times report, Anthony Joshua’s net worth is estimated at £115, which is quite massive. He is one of the world’s highest-paid athletes and the greatest boxers of the current generation.

What is Oleksandr Usyk’s net worth?

Usyk’s net worth is estimated at around $6 million, according to our reports. The Ukrainian is not so popular as other heavyweight fighters, but the fight against AJ will likely bring more paychecks in the future for him.