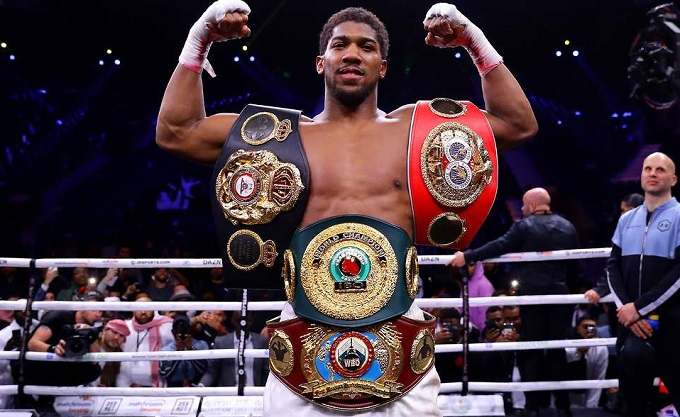 Before the fight against Oleksandr Usyk, Heavyweight boxer Anthony Joshua’s net worth and salary have been revealed.

Anthony Joshua (Anthony Oluwafemi Olaseni Joshua) is a British Professional Boxer and unified heavyweight champion. In September 2023, Joshua is set to fight against undefeated Ukrainian Oleksandr Usyk and after the suspension of the AJ vs Fury fight. According to reports, Anthony Joshua net worth is estimated to be around $155million.

He held the WBA (Super), IBF, WBO, and IBO titles previously between 2016 and June 2019 and then lost them to Andy Ruiz Jr. But Anthony then demanded a rematch, which was held in Saudi Arabia in December 2019, where he knocked out Andy and retained all the titles.

Anthony Joshua was born in Watford, and he began boxing at the age of 18 in 2007. The 30 year Old first rose to fame when he bagged the gold medal in the 2012 London Olympics. Anthony turned professional in July 2013 after signing a deal with Showtime, and he made his debut three months later, beating Italian Emanuele Leo, who lasted just 2mins 47secs. Joshua’s Pro Boxing career stands at 23 wins, in which 21 are by KO, and he has only lost one match in 24 fights.

Joshua makes a ton of money through endorsements. According to Forbes, he makes around $11 million through sponsorships deals and marketings. He is partnered and sponsored by numerous big companies including, Under Armour, Jaguar Land Rover, Beats Electronics, Sky Sports, Audemars Piguet, DAZN, Electronic Arts, and Hugo Boss.

Joshua’s most significant sponsorship deal was with Matchroom boxing and streaming service DAZN. It was an eight-year deal worth $1 billion. Lynx and Axe also sponsor him for beauty and hygiene and by Bulk Powders for Health and Nutrition.

It may seem like Anthony Joshua might be living a very lavish life, as he makes millions after each fight. But that isn’t the case; Anthony is a very humble person and doesn’t spend on unnecessary leisure and luxury.

The British Boxer still lives with his mum in an ex-council house and gets everything from his luxury cars, holidays to his clothes for free, all through his numerous sponsorships.

Joshua’s upcoming fight against Usyk and the victory at Tyson Fury vs Deontay Wilder fight is likely to boost Anthony Joshua’s net worth in the future.