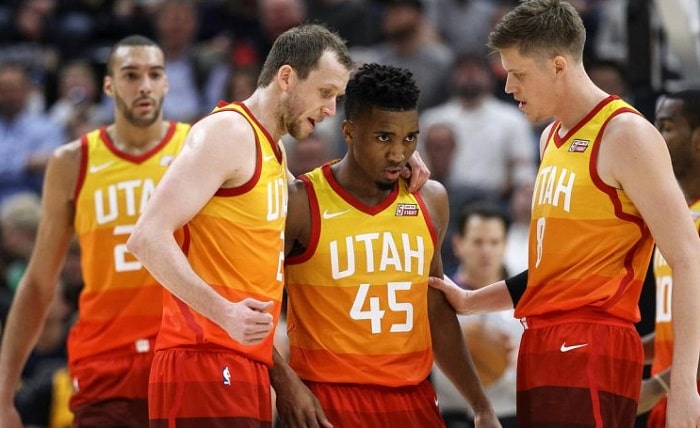 The Utah based outfit are yet to win an NBA title. They were a powerhouse in the early years of the league. Their first playoff appearance came in 1984. They followed it up by appearing in the playoffs for another 20 years. Major offseason moves have been made to help jazz challenge for the playoffs and maybe even the title. They currently have a team payroll of $154million, the 6th highest in the league. Utah Jazz Players salary cap this season sits at $113million.

Let us take a look at the highest-paid Utah Jazz player this year.

Kicking off our list is Joe Ingles. The Australian international will make over $12million in the NBA this year. The 33year old has played all over the world and has spent his entire NBA career at Utah. He signed a one-year extension worth $13million in 2022. Will he look to extend at the end of this season or hang up his boots?

Bojan Bogdanović will make just under $19million for his efforts in the NBA this season. The Bosnian veteran has had a fairly successful career wherever he has the player. He signed a 4-year deal worth $74million with Jazz in 2019. He will be hoping to emulate his success from his time in Turkey and hopefully propel Jazz to the playoffs spot.

The 3rd highest earner at Jazz is NBA veteran Mike Conley. He is set to make $21million in the NBA this year. The 33year old had spent his entire playing career at the Grizzlies until making the switch to Jazz in 2019. He signed a 3-year extension worth $74million in 2022.

Donovan Mitchell will be the second-highest earner in the Jazz roster this season. The 25 years who has spent his entire career at Jazz, since his draft in 2017, will make $28million this year. The two time NBA All-Star is one for the future. He signed a 5year deal worth $163million in 2022.

The highest-paid player at Utah Jazz is Rudy Gobert’s. The Frenchman will collect just under $35million this year in the NBA. The 2 times NBA All-Star has spent his entire NBA career with the Jazz. He signed a 5-year extension worth $205million in December of 2022. He will be expected to lead the Jazz to playoff spots this season.