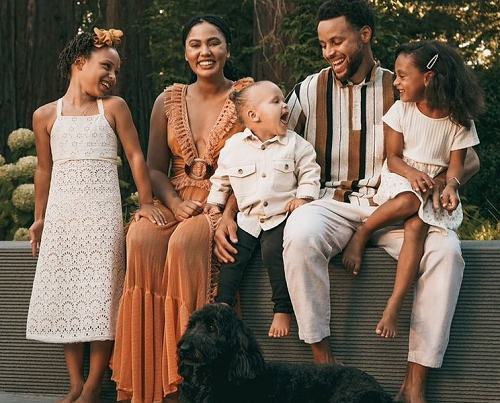 Stephen Curry’s Kids: All We Know About NBA Star Children

The pair are childhood sweethearts. Curry and his wife met in a youth club at a church when Stephen and Ayesha were 15 and 14 years old. While Stephen moved away for his basketball career Ayesha was busy making her mark in Hollywood, the couple reconnected again and begin dating.

On July 30, 2011, Ayesha walked down the aisle to marry the NBA Star, Stephen Curry. The couple has been tight ever since and been blessed with two beautiful girls and a baby boy.

The duo also shares few matching pair of tattoos, little arrows which they have a pre-match ritual with, as both of them look at each other and tabs the tattoo before every game. After the birth of their third kid, Currys had their second matching tattoo in 2019. These tattoos have a wolf, butterfly, and unicorn, which symbolise their children.

Who is Riley Curry?

Stephen Curry and Ayesha were blessed with their first child on 19 July 2012. The Currys welcomes the eldest of three kids, Riley Elizabeth Curry. She was born in North Carolina. In 2015, after she stole her father’s postgame interview, Riley was without question the most popular among Stephen and Ayesha Curry’s 3 children, she all began to get recognition.

She was lovely and she stole the show immediately. She was a phenomenon on the internet and was already a bit of her own celebration. In the first title of Golden State, Riley made her NBA presser debut in 2015. This is when the Warriors won the NBA finals for the first time in 40 years. That says how lucky she is for Stephen.

Riley has also done some modelling on her side, and one of her first concerts was in 2015, with Freshly Picked, a children’s fashion business.

Who is Ryan Curry?

Stephen and Ayesha Curry have been blessed with another beautiful daughter on the 10th of July 2015, who they named Ryan. Ryan Carson Curry and sister Riley’s birthday fall in the same month.

Ryan is currently 6 years old, Ayesha once mentioned in an interview that now she doesn’t bring her kids to the game as it messes up their sleep schedule because the game goes on till late at night sometimes.

Who is Canon Curry?

The youngest child of Stephen Curry is Canon Wardell Jack Curry, born on 2 July 2018. Canon means “officiant of the church” and “young wolf.” Canon is the first boy baby in the family of five.

Stephen and Ayesha initially thought of naming him Wardell Stephen Curry III after Dell and Stephen, and trey as a nickname but there were too many Trey’s in the family so they considered the name Canon. They mentioned the name Canon stuck to them. Canon’s middle name Jack was after his grandfather’s name to keep the family ties.