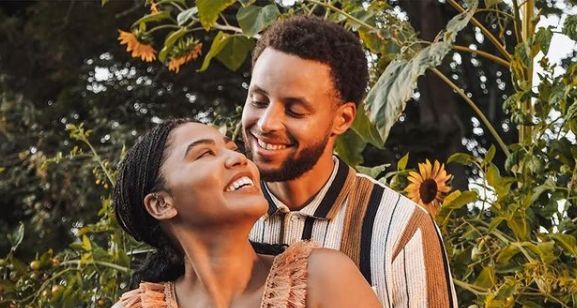 Who is Stephen Curry’s wife, Ayesha Curry? All We Need to Know

Golden State Warriors star Steph Curry was born on 14 March 1988. He has been named as one of the world’s most popular basketball players with three NBA championships. He has earned 2 MVP in league honors over the years. The 33-year-old has been married to Ayesha Curry for over 10 years now and blessed with three lovely kids. Here’s everything you need to know about Stephen Curry’s wife, Ayesha Curry.

How did Stephen Curry meet his wife Ayesha Curry?

The brilliant NBA star and Ayesha initially met in their teens via a youth group hosted by a church. At the time, Stephen was 15, and Ayesha was 14, and though they’ve indicated that they were fond of one other as young kids, it was not until several years later that they would hit it off as adults.

Ayesha was allegedly on a career in Hollywood, while Stephen was attending an award ceremony on the East Coast.

That’s when they reunited again, started dating. In 2011, Stephen proposed in his parent’s driveway, the exact place they shared their first kiss. She felt like it was a scene from The Notebook.

They walked down the aisle later that year on 30th July, while both were hardly in their 20s. The couple was then blessed with their first child in 2012, Riley, was always considered to be his dad’s lucky charm.

As in 2015 when Riley made his first press appearance the Warriors went on wins their first NBA title in 40 years.

In 2015, the duo welcomed their second daughter Ryan Carson Curry. and in 2018, the youngest and first boy, Canon was born to Stephen and Ayesha.

Stephen Curry’s net worth is around $130 million according to Forbes.

Stephen Curry’s wife, Ayesha Curry is a famous chef who began her culinary career in 2014 on YouTube without prior training as a professional chef. The daughter of John and Carol Alexander, Ayesha was born on March 23, 1989.

She is a prominent TV figure who has performed as a guest as well as judge in several cookery series. She built a network of restaurants in the United States and published multiple cookbooks and game programs, including “Family Food Fight.”

Ayesha currently runs a Mina/Curry International Smoke restaurant business which has two sites in the US. She has only lately inked the first agreement with Entertainment 1 and starts her own production firm.

Earlier than she acted in few movies and shows like Dan’s Detour of Life, Hannah Montana, Good Luck Charlie and more. She even hosted her own cooking show called Ayesha’s Home Kitchen.

Ayesha Curry net worth is estimated at around $16 million, most of which is earned via her Television career.

She is a cook, an author, a TV figure, a restaurant owner, a manager of several companies, a wife, and a mother of three kids. She has her own identity not just Stephen Curry’s wife.