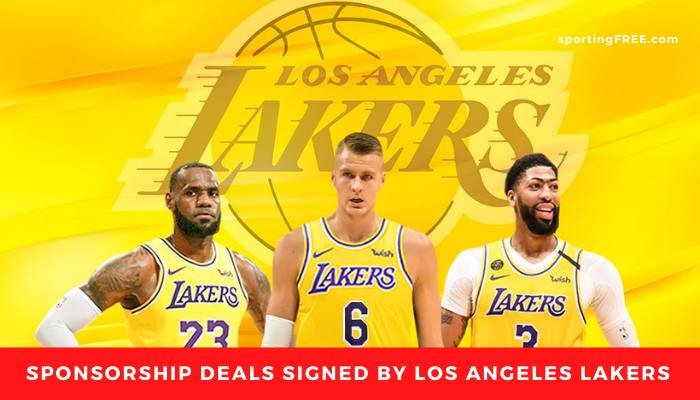 Together Celtics and Lakers have won 34 out of the 74 NBA Championships to date. Laker’s immense fan following can also be a result of the biggest names in NBA history playing for them over the years. Some of the greatest NBA players like Kobe Bryant, Shaquille O’Neal, and now LeBron James have taken the Lakers to a whole new level.

The Lakers are ranked third in the list of most valuable NBA Franchises at a net worth of $4.6 billion after No.1 ranked New York Knicks and Golden State Warriors.

Laker’s signed a huge three-year contract with a shopping app company named Wish, as their Jersey sponsor, paying the Lakers around $14 million a year.

Prudential is a fortune 500 and Global 500 company that provides insurance and financial services and has been associated with the Lakers for more than 25 years and has a current contract worth $30 million.

Adidas is a German multinational company that designs and manufactures shoes, clothing, and accessories. Adidas is the largest sportswear manufacturer in Europe.

American Express is a multinational financial services company and is the LA Lakers’ official card partner.

Beyond Meat is a producer of plant-based meat substitutes based in Los Angeles. They also sponsoring LA Lakers

Cincoro Tequila is one of the world’s finest and exceptional tequila producing companies and is the official partner of the Los Angeles Lakers since 2009.

Lakers Airlines’ partners are Delta, an airline company based in the United States.

East-West Bank is a banking corporation, the largest in South Carolina, and are the corporate partners for the Los Angeles Lakers.

Budweiser is a German company that brews American style lager beer, it is one of the world’s leading beer and they are the corporate sponsors for NBA team Lakers.

Canon is the world’s leading camera lenses and optical imaging accessories manufacturer, the company is based in Japan and is the corporate partner for Lakers.

Gatorade is a brand of sports beverage, drinks, and food products and is the sports drinks sponsor for the Los Angeles Lakers.

Pepsi is a multi-national company that produces beverages, signed a partnership deal with the Lakers.

Wingstop is a popular chain of restaurants famous for their delicious chicken wings.

The official healthcare insurance provider for all Lakers players is UCLA health.