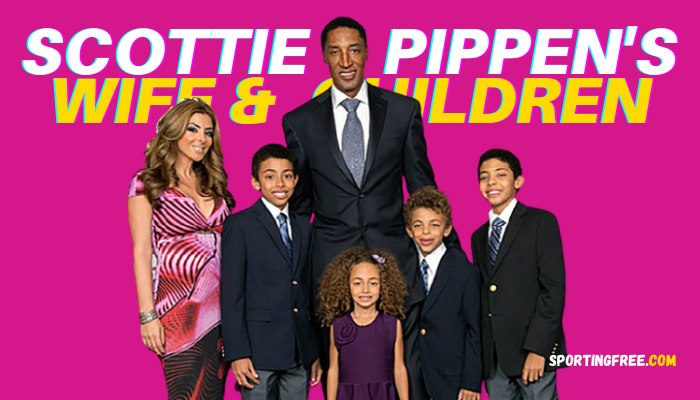 Chicago Bulls legend Scottie Pippen has always been news for his basketball skills. In his NBA career, Pippen found all the glory but he always had a messy relationship with women. The NBA star is a father of eight kids from four different relationships. His personal life was a roller-coaster ride and he had hit rock-bottom a few times.

Recently, at the age of 33, Pippen’s oldest son Antron died. He was Pippen’s only child with his ex-wife Karen McCollum. The Bulls legend has lost his second children after his daughter Tyler died in 1994, few days after her birth.

Karen McCollum was the first wife of Scottie Pippen. Their marriage lasted two years before splitting up. In this relationship, Scottie had his firstborn in the year 1987 named Antron. Antron connected to his dad through the love of basketball.

Who is Sonya Roby?

Sonya was a model by profession, the former couple dated in the year 1993. And soon after announced that they were expecting twins. Initially, Pippen denied the two children’s responsibility.

Who is Deleone Yvette?

Scottie discovered love in Deleone after the end of the relationship with Sonya Roby and the couple got engaged. On February 17, 1995, Scottie third child Pippen Sierra was born. After a misdemeanour battery charge against him by his ex-fiance Yvette, the couple split up.

In 1995, Scottie started dating Larsa Younan, she had recently finished high school and aspired to become a model and an actress. Larsa was 22 years of age and 9 years younger than Scottie. The couple got married and had four kids together.

In purchasing and naming a boat, Scottie Pippen showed his love “My Larsa.” Their relationship lasted longer than any other Scottie’s relationship. For 21 years, Larsa and Scottie were married before they both agreed in 2018 to divorce each other.

Scotty Pippen Jr, Preston Pippen, Justin Pippen, and Sophia Pippen are the 4 children of Scottie Pippen and his wife Larsa.

Who are Scottie Pippen’s Children?

He played at Texas A&M International University. He also joined the World Basketball Association after school and started to play for the Upstate Heat before moving to the Atlanta team. Sadly, Antron died on 18th April 2022 at the age of 33.

The twins Tyler and Taylor were born on 20th July 1994. They are the second and thirdborn kids of Scottie. Unfortunately, Tyler died after birth 9 days later. Taylor played volleyball for the club Voleibol Haris in Spain and has no connection with her father.

Born on February 17, 1995, Sierra Pippen is only child with ex-girlfriend Yvette De Leon.

Yvette struggled against Scottie and asked him to finance the support of Sierra. The NBA star lost the case and paid a huge amount to settle the matter. Scottie didn’t seem to have a connection with Sierra.

Scotty Pippen Jr was born on 10th November 2000. He is Scottie’s 4th oldest child and oldest child. Scotty is a talented basketball player, playing on the Vanderbilt University team, just like his father. He’s close and sometimes shares family pictures of a whole group with his three full siblings.

Preston Pippen was born in 2002. He is a 5th baby Scottie’s baby. Preston has a basketball affinity and plays with his Sierra Canyon high school. He is also close to his dad and shares photos here and there as he calls Scottie, “My man.”

Justin Pippen was born in 2005. he is the sixth oldest boy of Scottie. In addition, Justin plays Sierra Canyon basketball and is close to his siblings. His Instagram is a mix of basketball shots quite even and family photos.

READ: All We Know About Dwayne Johnson Kids

Sophia Pippen was born in 2008. In her own right, Sophia already becomes a star. She was signed by the modelling agency Wilhelmina and was also dancing with the Stars Juniors. Her Instagram is packed with model pictures, family photos and cute pictures.