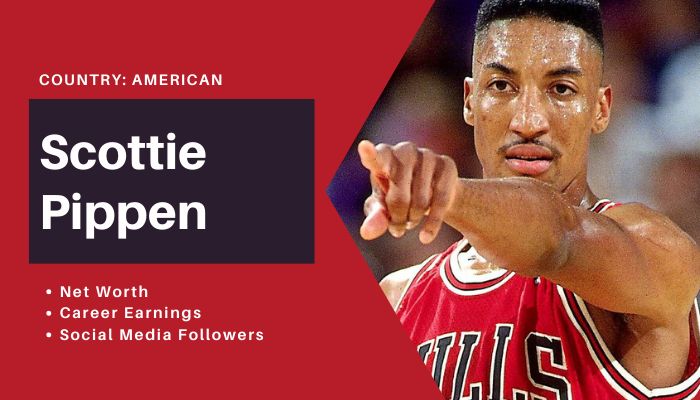 Scottie Maurice Pippen from Hamburg, Arkansas, United States, is a retired American professional basketball player. Scottie is considered one of the greatest small forwards of all time. Pippen played 17 seasons in the (NBA), 12 seasons with the Bulls, one with the Houston Rockets, four with the Portland Trail Blazers, and won six NBA championships with the Chicago Bulls. According to Sportscasting.com, Scottie Pippen net worth is around $50 million in 2022.

Michael Jordan and Scottie Pippen played a crucial part in converting the Bulls into a championship-winning team and popularizing the NBA around the world in the 1990s.

The Bulls retired Scottie’s number 33 jersey, and he is one of only four players to have their jersey retired out of honour and respect by the Chicago Bulls. Scottie Pippen formally retired from professional basketball in 2008, the last time he played for the Swedish side of Sundsvall Dragons.

Scottie has a current net worth of $50 million in 2022; it is speculated that in his 17 season-long careers, Pippen earned around $109 million in salary alone.

Although Scottie Pippen is often referred to as the most underpaid NBA player of all time, overshadowed by the greatness of Michael Jordan, in the run-up to the 1991 season, Scottie agreed to a seven-year contract extension worth $18 million.

In other words, at the height of the Bulls, at a time when Michael Jordan was making $30+ million a year in compensation, Scottie was earning $2.6 million. Later on, this contract began to frustrate Pippen, he started to feel he deserved more, and it was a bad deal that he signed.

But Surprisingly, Pippen earned $109 million throughout his NBA career, which is $15 million more than Michael Jordan’s $94 million.

Scottie managed to bag more than triple his previous contract by signing the $62.7 million deal with the Rockets in 1998. Finally, Pippen signed a final two-year deal with Chicago paying him $10 million a season, but he only played 23 games.

Scottie Pippen earned tens of millions from endorsements. The seven-time All-Star used to wear Sneakers of Avia brand in his first few NBA seasons, then, later on, switched to Nike like his then-teammate Jordan. Scottie endorsed a range of signature Nike shoes, like the 1997 Pippen 1.

Scottie has suffered a fair share of financial problems over the years, mostly because of his former financial advisor, Robert Lunn, who turned out to be a fraud and scammed a pile of Pippen’s earnings. Pippen sued Lunn in 2016, alleging that the financial consultant, highly recommended by the Chicago Bulls, had squandered $20 million of his income.

Less than a year after Lunn’s involvement, Pippen discovered that the advisor had made his investments and committed bank fraud. Lunn has given more than $7 million to a friend with a sketchy background to invest in real estate.

The real estate developer almost immediately declared bankruptcy, taking the money with him. Robert Lunn was then rightly sentenced to prison for three years on multiple frauds and for forging Pippen’s signature on a $1.4 million loan.

Pippen made several poor investments that led to the downfall of his net worth. The bleacher report had named Scottie Pippen one of the most financially irresponsible players in the history of the NBA in 2012.

Robert Dunn had also advised Scottie badly to purchase a $4 million Gulfstream jet that didn’t even work and cost $1 million for repair. All these factors and expensive divorces to his wives cost Pippen a lot of fortune.