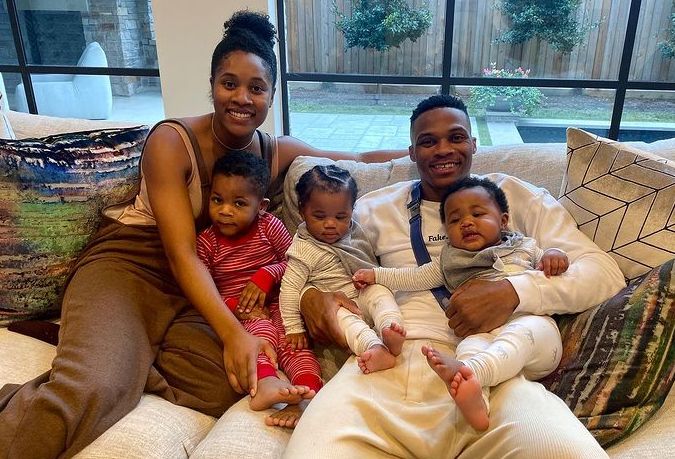 Who is Russell Westbrook’s Wife, Nina Earl? All We Know About the Couple

Nina Earl is more than just Russell Westbrook’s wife. She is a South California girl born on January 16, 1989. She has three siblings, Benjamin, Michael and Jonathan. She went to California’s Diamond Ranch High School where she played for the varsity basketball team at the school.

Nina was an excellent player and her accomplishments at the court got her admission to UCLA.

How did Russell Westbrook Meet Nina?

Both Nina Earl and Russell Westbrook were born in the Metropolitan Area of Los Angeles. They met at UCLA when Westbrook was a sophomore and Earl was just a freshman. During his time at UCLA basketball team, Russell met Nina. They became friends and quickly things became serious and friendship became love.

The couple’s love flourished after school, and once Westbrook opted to play for the Oklahoma City Thunder, they came to Oklahoma. Russell proposed on 4 September 2014 after dating for years.

On the 29th of August 2015, Westbrook and Earl got married in an outdoor setup. The wedding took place at Beverly Hills Hotel with friends and family and former teammates including James Harden, Kevin Durant, Kevin Love, Serge Ibaka and Dorrell Wright.

It was reported that the engagement ring which Nina wore was not less than $700,000. Russell hired a celebrity ring maker to help with the design. The couples’ wedding also featured in R&B’s finest.

After 2 years of marriage, the couple Russell and Nina welcomed their first kid Noah Russell Westbrook on 16 May 2017.

The announcement of their second child was made in a Youtube video by Oklahoma City Thunder. In November 2018, the couple were blessed with twin girls, Jordyn Westbrook and Skye Westbrook.

During her freshman year, Nina joined the UCLA women’s basketball team. She played 27 games and scored 15 points on the average per game in high school and has also won 3 MVPs of CIF and two players of the year during that time. at UCLA, Nina was outstanding, playing forward she played 124 games, scoring 675 points and made a rebound of 2.3 points in each game.

But Instead of choosing a career in basketball she went on to study psychology and became a licensed therapist.

She doesn’t really work as a therapist but she is recognised by her community and admirers as a lovely and friendly person.

What does Russell Westbrook’s wife, Nina Earl do for a living?

Currently, Nina has a shop called The Little Ark in Oklahoma City. The business not only offers children’s stuff, but it also sells moms products and stuff. In addition, it also provides new parents with infant courses.

Other activities like CPR classes, story reading, infant growth knowledge, and local postpartum spa activities are carried out by the business. She is also the founder and CEO of the ‘Minibrook’ apparel brand designed for children and newborns.

The former Basketball player, therapist and businesswomen, Nina Earl’s net worth is around $200,000. Her retail store, The little Ark, is the major source of her income. She is also known for her charity foundation which helps underprivileged kids.