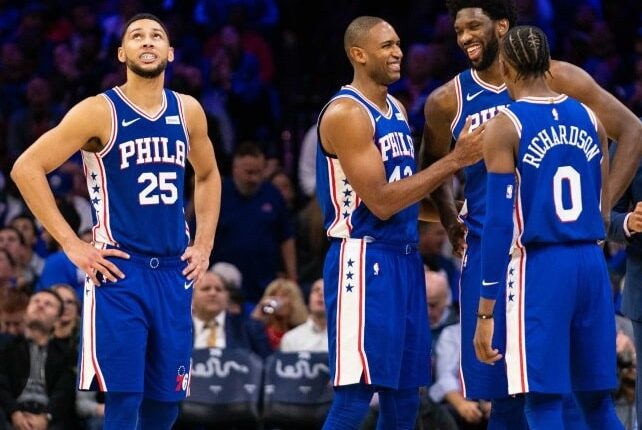 The Philadelphia 76ers have 3 NBA titles to their name. Most of their success as a franchise came in the 20th century, winning the title thrice between 1955 and 1983. However, success has taken a back seat in the 21st century, a revival with major signings underway at the 76ers. The team has a current net value of $2.075 billion and is owned by Joshua Harris and David Blitzer. The club generates annual revenue of $259 million.

The Philadelphia 76ers currently spend $144million on the players salaries. The club is the 7th largest in the league this year. The Philadelphia outfit has its 2022 salary cap set at $112 million.

These are some of the highest-paid Philadelphia 76ers players in 2022.

Kicking off our list is Seth Curry, who will make over $8million in the NBA this season. The younger of the Curry brothers are not even close to tasting the same success his older brother has. He signed a 3-year deal worth $24million in 2022 with the 76ers.

Coming in 4th is NBA veteran Danny Green. He will be making $10million for his efforts in the NBA this season. The 3 time NBA champion always knows where to be, if you know what we mean? He signed a 2 year $20million deal with the 76ers in 2022.

The 3rd highest earning 76er is one of their own. Joel Embiid will make over $31million in the NBA this year. He has spent his entire career at the Philly outfit after being drafted in 2014. The four-time NBA All-Star has signed a  four-year, $196 million supermax contract extension with the franchise.

The second-highest earner in the Philadelphia roster is Ben Simmons. He will collect a paycheck of $33 million in the NBA this year. The three-time NBA All-Star has spent his entire playing career so far at the 76ers since his draft in 2016. He signed a 5year deal worth $177million in 2019.

The highest-earning 76ers player is Tobias Harris. He will take home just under $36million this year. He signed a five-year deal worth $180 million with the outfit in 2019. IT has not all gone to plan for Harris as his performances are not like his wages. This could be the season he kicks on, though, for the franchise.