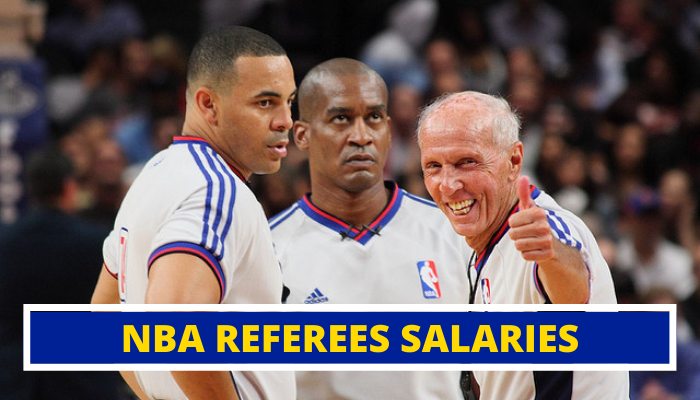 NBA Referee Salary: How Much Do NBA Refs Get Paid?

A huge amount of money is involved in the league due to which players get handsome salaries. Apart from players, referees also earn a huge amount of money from the NBA. The league has various high profile referees which are known for their precise judgement and decision around the world. The Job of an NBA referee is harder and hectic than people think and details about NBA referee salary rarely comes out in public.

An NBA referee needs to be calm, confident and must have concentration skills to make a decision in a high-pressure game in front of crazy fans. A good NBA has the patience and the ability to face stressful situations calmly. They also have to face criticism from the fans but do NBA refs get paid fairly? Here’s the detailed guide on how much NBA ref earns, the average NBA referee salary, the highest-paid NBA referee and the salary of an NBA referee compare to NFL, MLB, and NHL.

National Basketball Association (NBA) is a men’s professional basketball league in the United States of America. It is one of the world’s most popular sports leagues. The league consists of 30 teams, 29 teams from the USA and 1 team from Canada. A total of 82 games are played in the regular season while only 16 teams advance to playoffs.

NBA Referee Salary Guide: How Much Does an NBA Ref Earn?

The amount is huge but when compared to a minimum player salary, the ref wages are quite below. According to the NBA’s Collective Bargaining Agreement, even rookies cannot be paid less than $898,310. Various famous NBA players earn about $40 million a season.

The salary slab of referees is decided as per their experience. The entry-level referees are paid around $600 per match. If they are working full then they are paid $250,000 per season. WNBA referees even less. They get only $180,000 a year or $425 per match.

READ ALSO: NFL Referee Salary: How Much Do Refs Get Paid for Super Bowl

All the referees of the NBA and WNBA are members of the National Basketball Referee’s Association and they are also entitled to other benefits like travel expenses, insurances and various retirement plans.

Also as they are spending a great amount of time on the courts, they are giving away a lot of money for their shoes. More about this you can find at https://bestbasketballreview.com/best-outdoor-basketball-shoes/.

Some of the popular and highest-paid NBA referees are Scott Foster, Sean Corbin and Tony Brothers. These professional referees were used in the NBA 2019 final played between the LA Lakers and Miami Heat. Foster has officiated in 13 NBA finals and Brothers has officiated 9 NBA finals.

The popular and experienced NBA referees usually get a chance to feature in the lockout games where they get paid between $1000 to $5000 per game.

Another renowned NBA referee is Monty McCutchen. He spent around 26 years and officiated hundreds of games. Currently, he works as a trainer for the NBA referees.

Roles of Referees in NBA

In one NBA game, three referees are required, one is called crew chief and the other two are assistants. Their job is to ensure the game is played fairly without any fouls.

Just like other sports leagues, the NBA also uses video officiating. In case of confusion, NBA referees can check the reply before taking any decision.