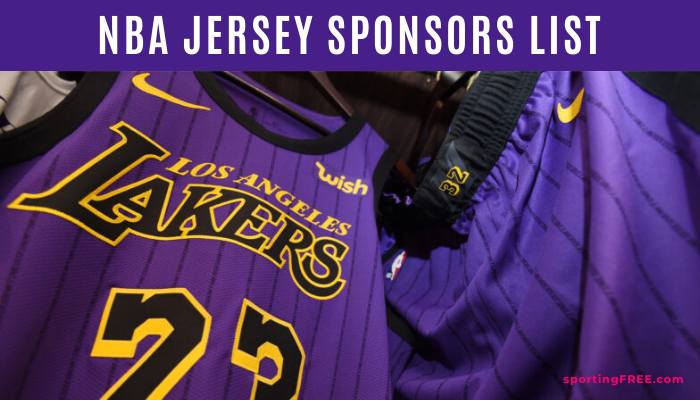 NBA is one of the world’s most popular and watched sports competitions, it has millions of fans not only in America but around the globe. Any big or small brands don’t miss a chance to feature on one of the team’s jerseys. Sponsoring these NBA teams could bring attention to their brand and advertise the brand to new markets. NBA revealed their new jersey sponsors list for the 2022 season.

Here is the list of NBA jersey Sponsors for 2022.

Motorola is a multi-national mobile and telecommunications company.

Goodyear Tire & Rubber Company is one of the leading tire manufacturers in the automobile industry and also sponsors the F1 racing Championships.

Flagstar Bank is one of the largest banks in Michigan State of United States.

Sharecare is a digital health and wellness platform. They also received the NBA partnership of the year for the NBA 2017-18 season.

Disney is one of the most popular mass media and entertainment companies. The Disney world entertainment park is just near the Orlando Magic’s home stadium.

GEICO is a US-based insurance company.

Western Union is a multi-national global financial services provider. The company is based in Denver.

Their sponsorship deal with Fitbit, a fitness band and smartwatch company ended in 2022.

Biofreeze is a brand of pain relief and anti-inflammatory gels, sprays, and other medical substances.

Rakuten is Japanese financial services and e-commerce company and has a sponsorship deal of $20 million a year with the Warriors. Rakuten is also the Jersey sponsor for FC Barcelona.

Honey is a financial services company and are the leading competitors to Rakuten, the Jersey sponsors for the Golden State Warriors.

Wish is an online e-commerce platform based in America and facilitates transactions between sellers and buyers.

PayPal is one of the world’s leading financial services and safest money transaction portals or platforms.

They were sponsored by Blue Diamond Almonds until the 2022 season.

Chime is a financial services and technology company.

FedEx is a multinational package delivery services company and was started in America.

Ibotta is a financial services and e-commerce company.

Frost Bank is a chartered bank providing financial and insurance services. It is one of the largest banks in the United States.