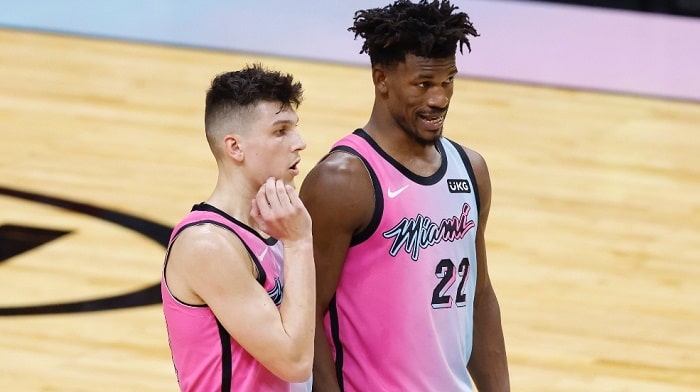 Miami Heat is relatively new to tasting success in the NBA. The Franchise won its first-ever NBA title in 2006 and have gone on to win it twice more in 2012 and 2013. The club is owned by George Kaiser, Clayton Bennett, Aubrey McClendon Estate, which they purchased in 2006. They are one of the most popular and valuable NBA clubs with a net worth of $2 billion. Heats generate annual revenue of around $266 million and spend $126 million on Miami Heat players salaries.

Miami has made some major moves in the offseason this year in the quest for another title shot. The Heat will be spending just under $140million on their team’s payroll this season. Let us take a look at Miami Heat’s highest-paid players.

Kicking off our list is 2022 NBA champion PJ tucker. He will make $7million in the NBA this season. The 36-year-old made his NBA debut in 2006 and has had stints in Europe and the Middle East before returning to the NBA in 2012. Tucker signed a  two-year, $15 million contract with the Miami Heat in 2022.

Duncan Robinson will make $15million in the NBA this year. The 27-year-old has had to do it the long way to get here. He was not part of the draft and had to work his way up the lower leagues. He signed a  five-year deal worth $90 million with the Heat in 2022. he is also the fastest layer in NBA history to hit 500 three-pointers. The future looks bright for Robinson, who will be key to the Heat’s season.

The six-time NBA All-Star and 2019 NBA Champion Kyle Lowry will make just under $27million this year. He signed from Toronto Raptors and agreed to a three-year, $90 million deal with Miami. He is another experienced addition to the team in their bid to reach the Finals.

The second-highest earner at Miami Heat this season is Bam Adebayo. He will collect just over $28million this season. The one time NBA All-Star is one for the future at only 24 years old. Bam signed a five-year deal worth $163,000,300 in 2022. He will be instrumental to Miami’s success this season.

The highest-paid player in the Heat roster is Jimmy Butler. He is set to take home just over $36million this year playing in the NBA. The five-time NBA All-Star recently signed a  four-year, $184 million contract extension which kicks in in the 2022/23 season. Butler is Miami’s main man to lead them to the finals this season.