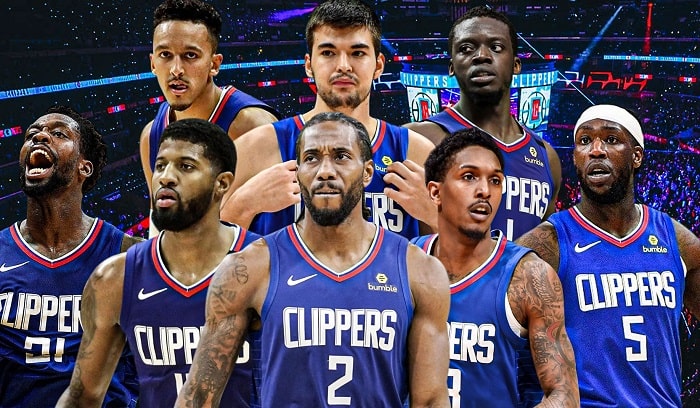 The less successful of the two LA franchises, The LA Clippers have 0 titles compared to their neighbours 17. The Clippers have made some massive moves in the offseason chasing silverware. They now have the 3rd highest wage bill in the NBA, standing at just over $166million. The club is owned by Steve Ballmer, which he purchased in 2014. They are one of the most popular and valuable NBA clubs with a net worth of $2.75 billion. The club generates annual revenue of around $262 million and spends $122 million on Los Angeles clippers players salaries.

Kicking off our list is Luke Kennard. The 25-year-old will earn just under $13million for his efforts in the NBA this season. Kennard signed a four-year contract extension with the Clippers $64 million. He could be one to watch for the future.

Marcus Morris will make $15.5million in the NBA this year. The 31-year-old never reached the heights some would have expected his career to reach. He signed a four-year contract worth $64million in 2020. The 31-year-old could really benefit from being part of the Clippers star-studded lineup this season.

The third highest-paid player at Clippers this year is Eric Bledsoe. He will make just over $18million this season. The 31-year-old is back for his second stint at the Clippers after starting his career at the LA outfit. He signed a two-year deal worth $37million with the Clippers.

This probably was one of the biggest moves of the offseason. Kawhi Leonard will make just shy of $40million at his new team this season. The two time NBA champion and five-time NBA All-Star signed a four-year deal to pay him $176.3 million through 2025 with the LA outfit.

The highest-paid Los Angeles Clippers player is Paulo George. He will also be making shy of $40million and is the highest-paid player by an excellent margin. The seven-time NBA All-Star signed a four-year deal worth $176.3. He will be expected to lead this clippers side along with Kawhi Leonard.