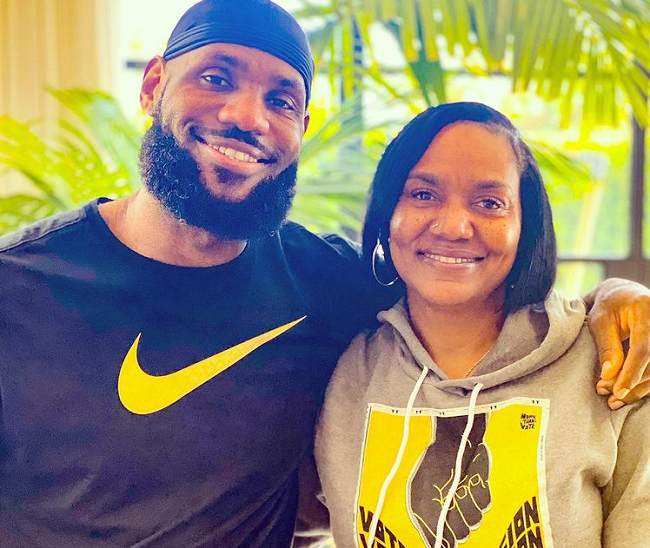 Who is LeBron James’ Mom, Gloria James? All We Know About Her

Lakers’ star LeBron was born on 30th December 1984 in Akron, Ohio, to Gloria James, who was just 16 at that time and Anthony McClelland. LeBron is one of the greatest basketball players in NBA history. The Lakers Superstar earlier played for Cleveland Cavaliers and Miami Heat. Throughout his remarkable career, James is known for many great things but famously known for raised by a single mother, Gloria James.

Gloria has had her fair share of time in the limelight, being the mum of a bonafide celebrity. Today, we shine the lights on her again as we see who is LeBron James’ Mom, Gloria James? along with LeBron’s father, Anthony McClelland.

Gloria was born to Freda James and Cantona James on 4th Feb 1968 in Akron, Ohio, where she spent the majority of her life. Gloria James has two siblings, Curt and Terry James. She gave birth to LeBron Raymone James when she was barely sixteen.

Her mother passes away when she was just 19 year old, due to a heart attack leaving her to raise LeBron alone at such a young age.

Gloria James has only one child, LeBron James. She often struggled financially and had to move house for jobs. Because of her pregnancy, Gloria did not complete her studies and therefore could not obtain permanent work.

At her age of 24, LeBron was nine at that time, she took one of her hardest decisions when she sent her son to live with another family. She felt that she couldn’t support LeBron anymore, and she sent him to live with Frank Walker, his football trainer. There his coach Mr Frank also known as “Big Frankie” introduced LeBron to basketball.

He was a famous basketball player at the high school where Gloria James used to go and both were dating in the 1980s.

When she was still a teenager, LeBron James’s mom had him. So her focus was entirely on parenting her child since then. Although she’s been in a relationship a few times, she never married anyone till now.

LeBron’s father is presumably Anthony McClelland, Gloria’s casual spouse, according to the 2002 article in ESPN Magazine. After he discovered she was pregnant, he left her immediately.

In 2013, Gloria James was reportedly in a relationship with the Miami-based rapper Da Real Lambo. However, their relationship didn’t go last long as Lebron discovered he was cheating on her, which apparently led to the breakup.

There also have been crazy speculations throughout the 2009-2010 season, linking Gloria to Delonte West, her son’s teammate, who was afterwards married to Caressa Suzzette.

What is Gloria James’ net worth?

The net worth of Gloria James is estimated at $2 million. Every year she gets more than $100,000 in income. Her salary and her net worth were grown because of her success as an entrepreneur and as a famous mother of LeBron James.