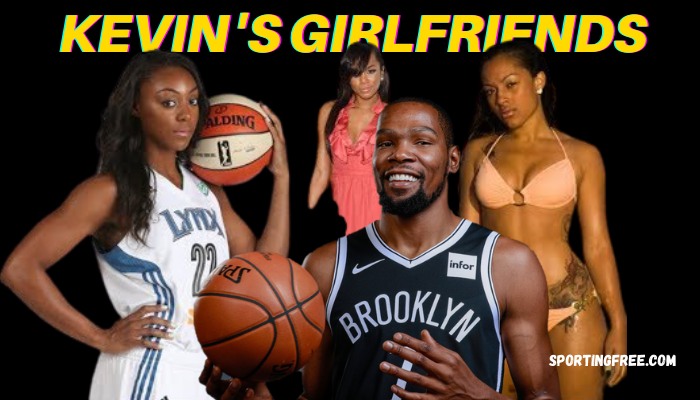 Kevin Durant is an NBA star born in Washington DC who plays for Brooklyn Nets. The two-time NBA champion has received many honours while playing on the court including MVP Awards, Most Valuable Player Awards, NBA Rookie and two Olympic gold medals. Off the court, Kevin Durant is popular for his link-ups with women. Currently, he is unmarried and has no kids.

Though Kevin was once almost walked down the aisle and he is also linked up with several women in past. One of the highest-paid basketball players in the world, Kevin is very close with his mother, Wanda. Today, we’ll see the Kevin Durant wife, girlfriends and complete dating history.

Who is Kevin Durant’s Wife and Girlfriends?

No, Kevin is single and doesn’t have any kids and is rumoured to be single for now. However, Kevin almost married the NBA star, Monica Wright.

Kevin Durant was engaged to Monica Ashante Wright in 2013, a WNBA Point Guard player. However, the couple never married, as they split ways months after Kevin pooped the question. Durant mentioned in an interview that,” he didn’t love her the right way”.

Monica Wright is 5’10 high and an American who played basketball in NBA and now is a coach. Her WNBA career continued until 2016 as she couldn’t continue due to injures.

Most recently when Lana opened up her life for dating on June 7th, Lana raised eyebrows at her 3 Girls 1 Kitchen show. The influencer showed she went on a date with a player for the Brooklyn Nets but did not name the basketball star directly.

But once Lana revealed that the Brooklyn Nets player is libra, the fan discovered the identity of the mysterious NBA great. Well, it was said that KD is presumably the only player on the squad to be a Libra for Nancy Drew-Esque fans who enjoy a good solution.

However, they appeared to be short-lived in their purported romance. Lana stated that she was “bored” and not “spicy enough” by the basketball player who was on a date with her.

Now, Kevin Durant did not clarify that if he is Lana’s story’s mysterious player. But fans speculated about their alleged romance.

Apryl Jones is an American reality television personality from Love & Hip Hop. According to reports, the two were seen together and flirted.

Jones, who has been accused of allegedly dating several other celebrities including Lil Fizz and Dr Dre. She has disputed the allegation of dating Durant in a YouTube video, calling herself polyamory.

READ: Who is Dak Prescott’s Wife, Natalie Buffett? All About Dak’s Girlfriends

In 2018, Durant dated Cassandra Anderson, as she was seen at his games cheering for him. Rumours claim the two may split up in October that year, as people noticed he failing to kiss her after a game.

Cassandra is now an estate agent and she erased her Instagram page after her break-up with Durant.

Jasmine Shine is also named as one of the girlfriends of Kevin Durant. While we are not clear when this connection began, it was stated that it came to an end in 2016. As Durant had to concentrate on the 2016 playoffs.