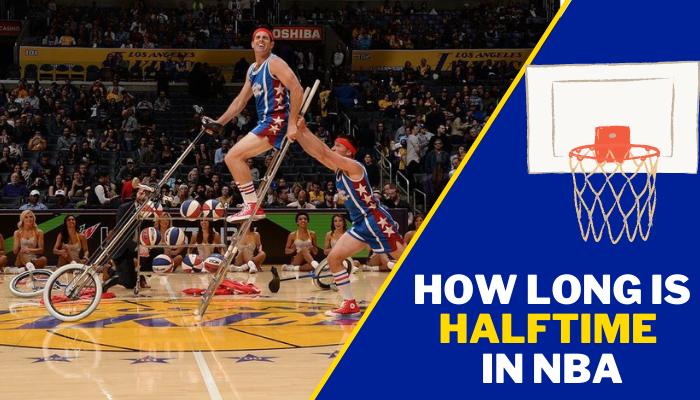 How Long is Halftime in NBA? Quarter-Breaks & Timeout Lengths Guide

The NBA halftime break is 15 minutes long and the quarter breaks take between the game last 130 seconds long.

How Long is Halftime in NBA

A season of NBA commences from October. Each team contesting in NBA plays 82 games throughout the season. As per the rules, each NBA game is divided into 4 quarters. Each quarter is 12 minutes long. The Half time break is given after the completion of the second quarter. The purpose of halftime is to divide the game into two equal halves so that the players get some rest.

The duration of halftime is 15 minutes. During this time, teams head back to their locker room and the coach briefs the players about tactics and strategies that need to be made in the next half. The game is suspended for 15 minutes and the watches stop as the time is reset for the next half.

A few minutes before the competition of the 15 minutes, the teams head back on the court and take practice shots. The half time is utilized for the commentators to make an analysis of the first half and give their expert advice. It is also used to change the field direction so that no team has a better preference or bias.

In high school basketball, the duration of halftime intermission is 15 minutes similar to NBA but the length of each quarter remains 12 minutes.

How long are NBA Quarter Breaks?

Along with the halftime break, NBA games also have quarter breaks. These breaks are given between the quarter 1 and 2 of the first half and quarter 3 and 4 of the second half.

These quarter breaks are called intermission and each break is for a duration of 130 seconds.

How Long is NBA Timeout?

Timeouts in NBA are used to give players rest. Coaches call timeouts to make a substitution, call a play or stop the game for a while. In NBA, each team has 7 timeouts. There are 2 mandatory timeouts in each quarterly period.

A timeout is only granted to the player or the coach of a team when the ball is dead or in control of a player on the team making the request. A request at any other time is not granted. Each team is allowed two timeouts in the Overtime period.