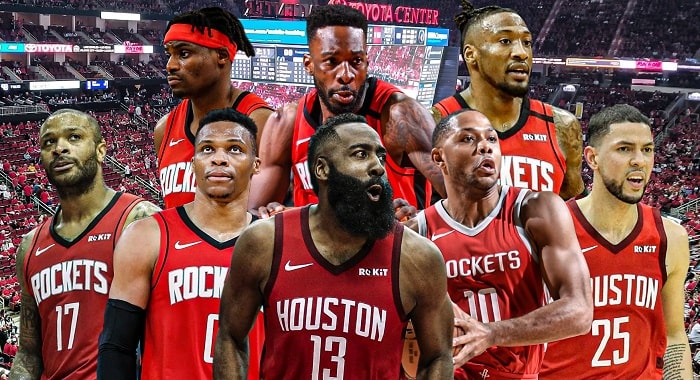 The Houston Rockets are almost synonymous with James Harden in recent years. The 2 team NBA Champions have never reached the heights of their mid-1990s roster. The team currently spends $122million on their team’s payroll this season. The club is owned by Tilman Fertitta, which they purchased in 2017. They are one of the most popular and valuable NBA clubs with a net worth of $2.5 billion. Rockets generate annual revenue of around $308 million and spend $124 million on Houston Rockets players salaries.

Let us take a look at the highest-paid players in the rockets squad.

Kicking off our list is Daniel Theis, who will make just over $8million in the NBA this year. The 3 time German League champion signed a four-year contract worth $36 million with the Rockets. The former Celtics and Bulls player has been an interesting addition to the Houston roster, to say the least.

Jalen green will make just under $9million in his rookie year in the NBA. The 2nd overall pick in the 2022 NBA draft signed a contract at 120% of the rookie limit. He is set to be central to the Rockets rebuild after the departure of James Harden.

The 25-year-old has been around the scene for quite some time now. After going undrafted in the 2015 draft, he has slowly worked his way to the NBA. This year Wood is set to make over $13million playing for the rockets. His career has finally found some stability at Houston, and this year might be his chance to shine.

The second-highest-paid player in the Houston Rockets squad, Eric Gordon, will be making $18million for his efforts this year. The NBA veteran signed a four-year contract worth $75,574,356 in 2022. He will be instrumental to the Rocket’s season this year.

The highest-paid Rockets player in NBA is John Wall. He will take home a paycheck of $44million this season. He signed a four-year, $171.132 million contract in 2022. The five-time NBA All-Star is Houston’s, main man. Wall will be expected to lead this roster to hopefully a playoffs spot.