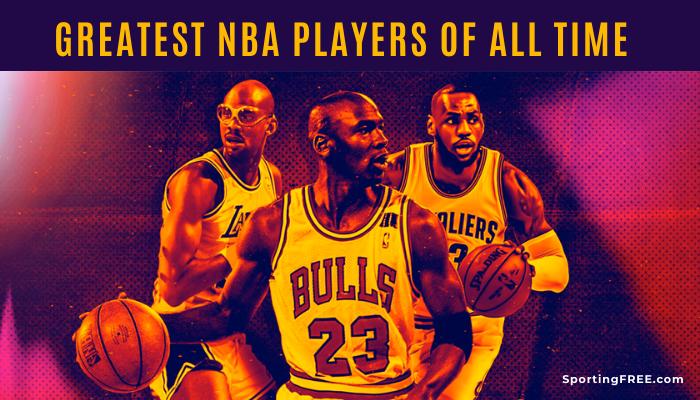 Basketball is a sport that is unpredictable and things can change in a second. A good player can snatch victory from opponents in the dying minutes. In the NBA history of 70 years, plenty of stars dazzled fans and some even became members of the NBA hall of fame. Here in this article, we will look at the top 10 greatest NBA players of all time.

Charles Barkley represented Philadelphia, Phoenix and Houston in his 15 years career. He had an average double of 22.7 and 11.7 rebounds per game. He is only behind Labron James and Micheal Jordan in terms of career box plus/minus. The biggest surprise is he couldn’t win the NBA championship.

Karl Malone had 25 points and 10.1 rebounds per game during the major part of his 20 years career. For a stretch of 5-6 years, he even averaged 29 points per game. Like Charles Barkley, he also didn’t get his hand on the NBA Championship.

Elgin Baylor is one of the greatest NBA has ever had. During his career, he was always short of luck. Despite reaching the final 8 times with LA Lakers he failed to win a single title. Averaging 24.5 and 13.5 rebounds, Baylor is definitely one of the best the game has ever produced.

‘Mamba’ won five NBA titles with the Lakers. For a record 15 times, he was part of the NBA team of the year. He also averaged 25 points per game. Bryant will always be remembered as one of the greatest Basketball players of all time.

Larry Birds played for Boston and made 5 NBA finale appearances and won three out of it. Birds averaged 24.3 points, 10.0 rebounds and 6.3 assists per game in his career. He also has 59 career triple-doubles. He deserves to be on the list of greatest NBA players of all time.

Magic Johnson is one of the best in the game. He won five championships with the LA Lakers. The all rounder is an epitome of consistency. He maintained 19.5 points , 7.2 rebounds and 11.2 assists per game in his 16 years old career.

One of the greatest NBA players of all time, the 7 feet 1-inch giant Wilt Chamberlain was unstoppable in his days. He managed to have 22.9 rebounds per game. This is the highest by any player in NBA history.

Kareem has a career total of 38,387 points, highest by any player. Further, he had 24.6 points and 11.3 rebounds during his career. His splendid record earned him the selection in NBA all star 19th times. He won 6 NBA Championships.

LeBron James is one of the best players to play in the NBA. The modern-day beast has an impressive record of 27.11 average points, 7.3 rebounds and 7.4 assists. Amongst the current player, his 12 times selection in the NBA all-star team is the highest.

Micheal Jordan is the biggest legend of the game and the greatest NBA player of all time. He is the greatest scorer of NBA history with an average of 30.1 points per game. Jordan was equally proficient in defence, he had 2.35 steals per game. He won 6 NBA titles and was MVP in all 6 appearances he made in the finale.