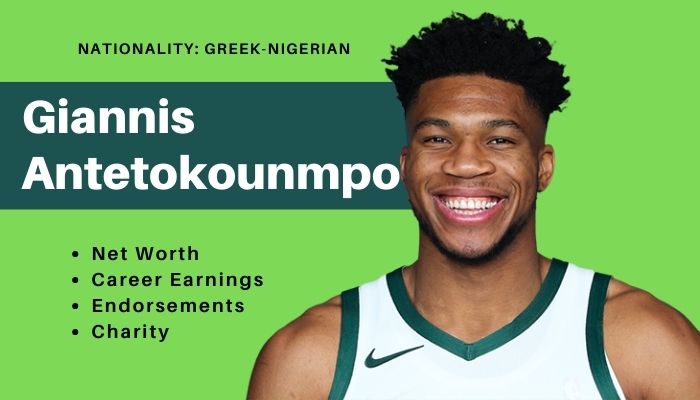 Giannis Antetokounmpo is a Greek- Nigerian professional basketball player who currently plays in the NBA for Eastern Conference team Milwaukee Bucks. Giannis is one of the best offensive players in the world currently. His fame and skill set grab him lucrative contracts that boost Giannis Antetokounmpo’s net worth significantly. Recently, Antetokounmpo led his team, the Bucks, to win their first NBA championship since 1971, defeating the Phoenix Suns in the NBA Finals and winning the NBA Most Valuable Player Awards.

The Greek Freak is one of the highest-paid players in the NBA, with an annual salary of around $45 million. Giannis penned a five-year contract extension with Milwaukee Bucks in 2023. The deal is worth $228 million. Here is the salary Giannis will earn after signing the contract extension.

According to reports, Antetokounmpo has a net worth of $70 Million. Forbes listed Giannis Antetokounmpo as the 18th richest athlete in the whole world in 2023.

Antetokounmpo holds the largest NBA contract that is worth around $228 million for five years.

Milwaukee Bucks picked Antetokounmpo in the 2013 NBA draft, and in 2013, he signed his rookie contract with the team. He made his NBA debut at the age of 18 and was one of the youngest players to play the NBA.

Giannis Antetokounmpo is one of the best NBA players currently. He began his professional basketball career in Greece at Filathlitikos senior men’s team. He later played with Spanish club Zaragoza in 2012-13.

READ: Tom Brady Net Worth 2023: How Much Salary Do Buccaneers QB Earn?

Antetokounmpo officially made himself eligible for the 2013 NBA draft. The Greek was eventually picked up by Milwaukee Bucks in the 2013 draft and has played at the team since then. Giannis has developed from a rookie player to one of the most important players of the Bucks.

Antetokounmpo won back-to-back NBA Most Valuable Player Awards in 2019 and 2023 and became the third player in NBA history to win two MVPs before turning 26, joining the list of Kareem Abdul-Jabbar and LeBron James. He was also named the NBA Defensive Player of the Year in 2023, becoming only the third player after Michael Jordan and Hakeem Olajuwon to win both awards in the same season.

In 2019, Giannis and his brothers started the AntetokounBros Academy to help young boys and girls kickstart their basketball careers. He donated $100,000 to the staff of the Fiserv Forum who were without work during the Pandemic.