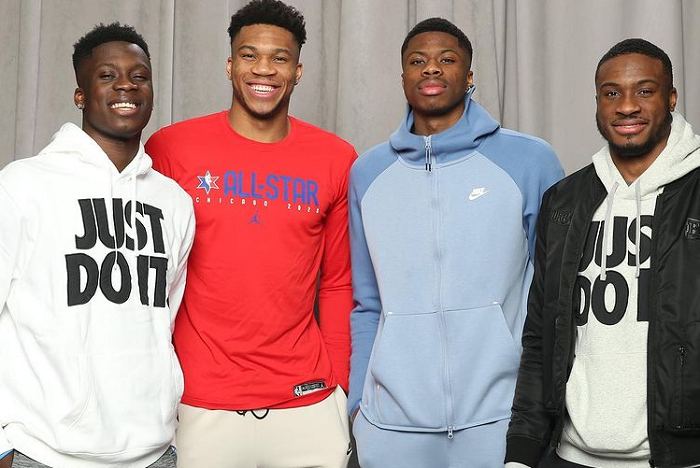 Giannis Antetokounmpo Brothers – All You Need To Know

He then declared himself entitled to the 2013 NBA Draft, which the Milwaukee Bucks selected, a team he has played since then, with the 15th overall selection. Antetokounmpo used No 34 and played the leading role.

He has been an all-star NBA four times throughout his career and has earned the Most Improved Player. And he earned the MVP award in 2019.

Giannis Antetokounmpo Brothers – All You Need To Know

2017 Most Improved Player Award winners Giannis Antetokounmpo are five brothers – older brothers Francis and Thanasis, and younger brothers Kostas and Alex. Four of them play basketball, and three among them play in the NBA.

The 32-year-old Francis Antetokounpo is the oldest of five Antetokounmpo brothers. Thanasis age is 28, Giannis is 26, Kostas is 23, and Alex is the youngest of all brothers who is just 19 years old.

Unlike his other brothers, Francis, the elder among the brothers, is a footballer. He hasn’t got the fame in his career, as he mostly acts as a midfielder on Greek sides. The Greek 4th tier side Aittitos Spata Football Club was Francis’ last established club.

Though basketball was Francis’ early effort in athletics, Francis was with the men’s first team club, but only in the Greek 3rd division semi-pro. He turned to football later.

The second of the five brothers is Athanasios, also referred to as Thanasis. He was born in Athens on 18 July 1992. In the Milwaukee Bucks, Thanasis plays with Giannis. The Knicks originally bought Thanasis Antetokounmpo as the 51st round 2 selection in the 2014 pick.

After five Summer League games with the Knicks, he was acquired by the Westchester Knicks of the G League. After spending two years in and out of the United States, Thanasis relocated to Spain and joined MoraBanc Andorra from the ACB League. Later he moved to Milwaukee with his brother.

READ: LeBron James – All You Need to Know About his Children

Kostas was born on 20 November 1997 and, like Thanasis and Giannis, had a fleeting time in the youth squad of Filathlitikos. The final pick of the 2018 NBA draught was Kostas Antetokounmpo.

Kostas was initially chosen by the Philadelphia 76ers later traded to Dallas Mavericks. He also played with the NBA club and their G League unit, much like his older brother.

Kostas is also part of the roster of the Los Angeles Lakers, consisting of LeBron James and Anthony Davis. He mostly plays for the South Bay Lakers G League side. His lucky break was much earlier than that of Thanasis. Kostas is just 22. He definitely has time to impress and possibly only frequently appear on an NBA side.

Alex is currently in the seedling stage for his career, the youngest of the Anetokounmpo brothers. Next year he is qualified for NBA.

But sources collected indicate that last month, UCAM Murcia, the 19-year-old signed a three-year contract with the Spanish side.