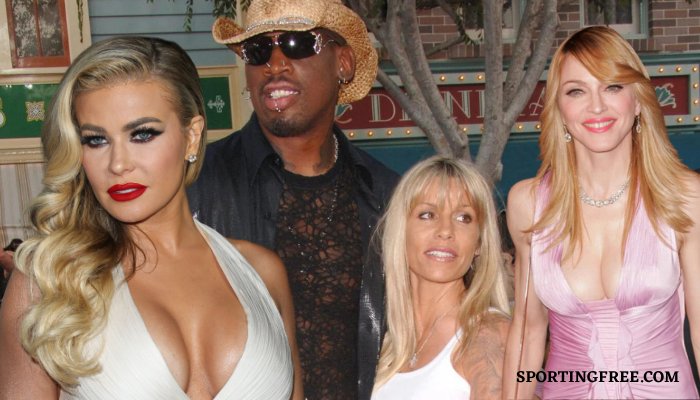 Who All Has Dennis Rodman Dated? List of the NBA Star’s Ex-Wives & Girlfriends

Chicago Bulls legend Dennis Rodman dated many celebrities in his relationship timeline. In his NBA career, he dated Annie Banks and later got married to her but after the divorce, he dated personalities like Madonna and Carmen Electra. A list of Dennis Rodman girlfriends to ex-wives and who is Dennis Rodman dating right now.

Dennis Rodman is a retired NBA player. He started his career with the Detroit Pistons. Rodman also played San Antonio Spurs, Chicago Bulls, Los Angeles Lakers and Dallas Mavericks during his career. The American retired in 2000. He has married thrice. Here is the list of the NBA star’s ex-wives & girlfriends.

The list includes names of all Dennis Rodman girlfriends through the years, rumours as well as verified.

Rodman started dating her before he made his NBA debut. They married in 1992 after his NBA debut with the Detroit Pistons. After just one year, the couple separated and divorced. Although, they both have a daughter Alexis Rodman. The next beautiful women on the Dennis Rodman girlfriends list is popstar Madonna.

Madonna has been the most famous celebrity, Dennis Rodman has been linked with. She needs no introduction. The singer has been “Queen of Pop” for over four decades. Madonna released her debut album in 1983.

Other than singing, she has also done dance, direction and acting.  Like a Virgin, Ray of Light, Confessions on a dance floor etc. are some of her albums which have global recognition.

The thing between her and Rodman was for a very short period of time. Rodman in one of his interviews in 1995 confirmed having a ‘fing’ with the pop star. Madonna and Rodman posed for the VIBE magazine. However, the particular edition of the magazine was not released due to various reasons.

After break up with pop star Madonna, Rodman dated popular actress Vivica Fox in the year 1997.

In November 1998, Rodman married model Carmen Electra at the Little Chapel of the Flowers in Las Vegas, Nevada. With her also his relationship ended after one year.

In 1999, Carmen Electra filed for divorce. She has also been a part of multiple television series such as Baywatch, Singled Out, Dance Fever and many more. After the divorce, Michelle Moyer was the women on the Dennis Rodman girlfriends list.

Rodman moved on quickly and in a short span of his separation with Carmen, he started dating Michelle Moyer. The couple became parents when in the year 2000, Michelle gave birth to their son, DJ.

In the very next year, she gave birth to their second, Trinity. In 2003, Dennis married Michelle on his 42nd birthday.

Who is Dennis Rodman Dating?

This was Dennis Rodman’s last relationship and there is no news in the public about his link-ups with other women.