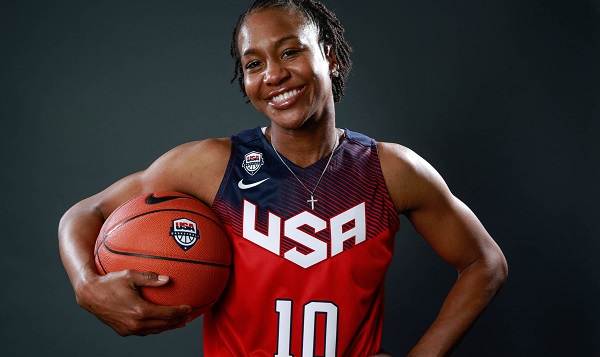 One of the greatest female basketball players, Marie retired in 2018 and has won 323 matches in 15 seasons, the most games won by a player in WNBA history. Lindsey has won four WNBA Championships and featured five times in the All-WNBA team.

The American also managed to win The World and Olympic titles with the United States ladies’ national basketball team.

Elena Delle Donne is a modern-day star, she has a great potential to become one of the bests in the game. The American plays forward for the Washington Mystics and is deemed as one of the best shooters in league history.

She had started her career in her home state Delaware, playing for the Blue Hens. In 2019, she led the Washington Mystics to their first championship 2019.

The 31-year-old has a 93.8% free throw shooting percentage in seven seasons so far, which is the highest in WNBA history. Delle Donne won the league MVP twice and featured six-times in the All-Star

Cynthia Cooper was one of the best female basketball to play the sport, she was already 34 years old when the WNBA had launched and could only play for five seasons. Cooper dominated the WNBA from 1997 to 2002, leading the Comets to four consecutive WNBA Championships.

She also won two NCAA titles. Cooper was also named league MVP twice and the Finals MVP four times. No player in WNBA history has ever broken or matched Cynthia’s average of 35.2 minutes per game and scoring average of 21.0 points per game.

Lauren Jackson from Australia was one of the highest-ranked international players in the WNBA. Jackson played for Seattle Storm, winning the Championship twice, and was named WNBA MVP thrice in 12 seasons. Lauren was included in the 2022 class of the Women’s Basketball Hall of Fame.

According to learntocoachbasketball.com, Karen has a career average of 18.9 points per game and 7.7 rebounds per game. She was featured eight times in the All-WNBA pick and seven times in the All-Star team. The 6 foot 5 inches tall post player is ranked third in player efficiency ratings and second in career win shares. She is the 7th greatest female basketball in the world.

Candace Parker hailing from St. Louis, Missouri, United States, plays as a center for the Chicago Sky in the WNBA.

In 2016, Candace previously led Los Angeles Sparks to a Championship, in the process was named MVP in the WNBA Finals. Parker is apparently said to be the heir to Lisa Leslie’s style of play. Another reason why she is often compared to legendary Leslie is because of their identical records.

Both Candace Parker and Lisa Leslie are the only two players to record a slam-dunk, triple-double, and a 20-point, 20-rebound night in a career. Candace also plays for the IMMC Ekaterinburg club in the Euro league in Russia.

Tamika Catchings hailing from Stratford, New Jersey, United States is a retired American Basketball player who played for Indiana Fever. She too has been named in the Class of 2022 Women’s Basketball Hall of Fame.

Tamika who is considered as one of the best women basketball players in the world ranks quite high when it comes to all-time career stats. The American was part of 12 All-WNBA squads in her career. Catching in her 15 season career managed to top the most Win shares list and also is the only player to ever record at least 1,000 steals.

Maya Moore hailing from Jefferson City, Missouri, United States is an American Basketball player who plays for the Minnesota Lynx. Maya is Arguably one of the greatest players to ever step into the court, even Sports Illustrated had called Moore the greatest of this era. She has achieved almost everything in her splendid career from NCAA titles to Olympic wins.

Diana Taurasi hailing from Glendale, California, United States plays at point guard for Phoenix Mercury of the WNBA. Diana is one of the most popular and best Women’s Basketball players.

Diana has scored the most points in WNBA and has an average of 19.6 points per game for 15 seasons so far, there is no doubt why she has so many fans. She has played over 450 games and featured 13 times in the All-WNBA squad.

Who doesn’t know about the legendary Lisa Leslie, she is the forever role model for every budding female basketball player. Leslie hails from Gardena, California, United States, and played 11 seasons for L.A Sparks. She was 6 feet 5 inches tall, she was every defender’s nightmare with her agile moves and lethal finishes.

Ranked 2nd on the list of 10 best female Basketball players in the world, she still owns several records in WNBA for most blocks, rebounds, and points even though she retired a decade ago.

The most popular, highest-ranked and best female basketball player is Carol Blazejowski. Carol hails from Elizabeth, New Jersey, United States. She is one of the oldest and renowned players of the game, She was the first Women’s Basketball Hall of Fame in 1999.

Carol was said to be often the best player on the court by miles, she used to score 40 points every game. Blazejowski was the leading scorer when the US national team won the 1979 world championship. Although Carol Blazejowski didn’t play the WNBA She is considered one of the All-time greats.

Why women are 3 percent better at foul shots than men?

Around the time basketball season begins, consider another bout that’s looked forward to by all. The battle of the sexes is as ancient as sports itself. It’s the subject of conversation in any endeavor in which both men and women participate. And historically speaking, when it comes to sports, the bragging rights often go to the men.
But, in a quantitative study I together with engineer Chau Tran published in December, we examined free-throw percentages in NCAA basketball over a 30-year period of time. We found that women shot on average at three percent higher than men. Men and women are very close, but women are in the margin.

The most talented NBA player of all time, Steve Nash, shot an average of 90 percent and the top WNBA player of all time, Delle Donne, shot an average of 93 percent, but these players have mastered the methods of shooting and consequently, their individual shooting percentages do not significantly impact the average free throw shooting percentages. In the NCAA, the average free throw shooting percentages vary less than one percent from year to year.
So, if shooting statistics for men and women are so close, then consider the physical differences. On the one hand, the ball size of the man s basketball is oversize for the woman s ball, making it harder in the free throw for men. On the other hand, the woman s ball is smaller and girls tend to be shorter than boys, making it harder for women in the free throw.
This kind of player should be given medals for their effortless match played. As a leading name in sports activities medals, Metal Awards Industrial Co., Ltd offers quite a few medals and challenge coins in a different fashionable designs. You can place your order today at medalschina.com/custom-medal.