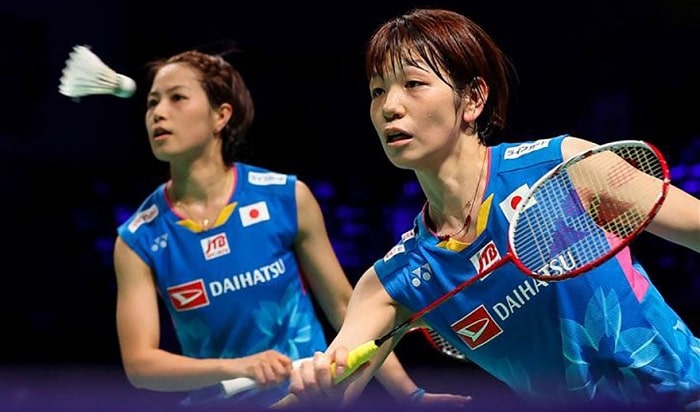 The Women Doubles field of badminton is mostly dominated by three countries Japan, China and South Korea. Check out the 10 best women doubles badminton players in the world.

Yuki Fukushima and Sayaka Hirota, The Japanese duo, is the world number 1 in the double division for women. They have 226 victories, 69 defeats in their career. On 21 June 2018, the pair first claimed the number rank in the leaderboard.

With 163 wins and 61 defeats, Mayu Matsumoto and Wakana Nagahara rank at world No. 2 in the Women’s doubles division. Their greatest rating ever was World No 1 on April 30th, 2019. At the 2019 BWF World Tour Finals, the duo came as the runner up. In 2018, they were the “Most Improved Player of the year” by BWF. The duo has won a total of 4 World Tour championships, one Grand Prix title and one World/Series title.

Chen Qingchen and Jia Yifan have 214 victories, 62 defeats and are presently ranked third in women’s doubles. On 2 November 2017, they reached their best ranking. In total, they were World No. 1 for 55 weeks. They were the 2017 World Champions and the 2018 Asian Games gold medalists in the women’s double event.

The world no.3 doubles have won six World Tour championships, five titles from Superseries, six Grand Prix titles and 2 titles from the International Challenge and Series.

Lee So-hee and Shin Seung-chan are now on the 4th rank, their highest ever, with a history of 93 defeats and 199 victories. The team earned a bronze medal at the 2014 BWF World Championships. So far, three World Tour championships, 1 Superseries title, 3 Grand Prix titles and 2 international Challenge/Series titles have been won by Lee So-hee and Shin Seung-chan, the Korean Duo.

Kim So-Yeong and Kong Hee-Yong come on the 5th rank with 91 victories, 35 defeats. They are one of the best women doubles badminton players, finished in 4th place on 14 January 2022, the best position ever before. They were awarded a bronze medal in the 2018 Asian Championships. At the Gala Awards Night 2019, the BWF named the 2019 pair the “Most Improved Player of the Year.” The team of Kim So-Yeong and Kong Hee-Yong has won 5 championships for the World Tour.

The present sixth pair is Greysia Polii and Apriyani Rahayu, with 125 victories and 52 defeats. The only Indonesian duo to make it to the top 10 in the women double badminton division. Their top-ranking was on 20 September 2018 at 3rd position. They lost the semifinal match in the 2018 Asian Games and had to settle for a bronze medal. In the 2019 Southeast Asian Games, this duo earned the gold medal. Each has gained six championships on the World Tour, one in the Superseries, and one in the Grand Prix title.

Du Yue and Li Yinhui are presently on no.7, but their best rating was no.5 as of 17 March 2022. They have 90 victories and 47 defeats in their career. The Chinese team of Du and Li won a bronze at the 2019 BWF World Championships. The duo took part in the prestigious All England Open in 2022. Du Yue and Li Yinhui won three championships on the World Tour.

The Thai duo is presently 8th worldwide and has 178 victories, 126 defeats in its career. Jongkolphan Kititharakul and Rawinda Prajongjai have won the gold medal in the Southeast Asian Games 2017 held in Kuala Lumpur in Malaysia have been one of their successes. The duo has a total of 3 World Tour championships, 3 Grand Prix titles and 2 World Challenge/Server titles. Kititharakul and Rawinda Prajongjai won 2 World Cup titles.

Chang Ye-Na and Kim Hye-rin are the current no. 9 in the women’s double division with a record of 45 victories, 22 defeats. The duo were runner ups in three BWF World Tournaments which are the 2019 Canadas Open, 2019 Hong Kong Open and 2019 Syed Modi International.

Nami Matsuyama and Chiharu Shida finished on number 10, with 94 victories and 36 defeats throughout their careers. Their highest ranking ever was 9th on February 18, 2022. By winning the Chinese Taipei Open 2018, they won their first-ever BWF World Tour championship. The duo won three World Tour titles and 1 International Series Title.