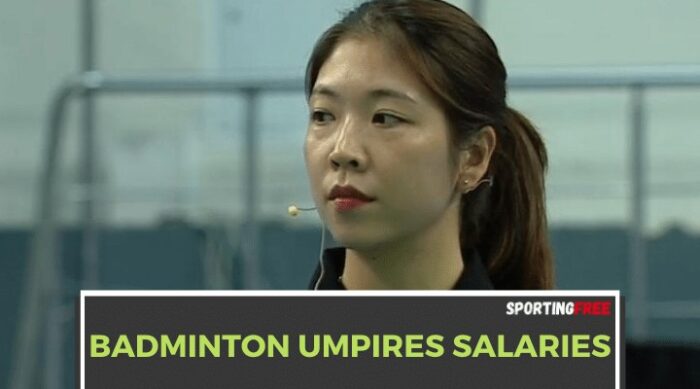 There are major differences between Umpires and Referees in any sport is their tasks and responsibility they performed during a game. And badminton is the perfect sport to mark the distinguishing factor. Badminton is one of the few sports to have both umpires and referees in a match. But there is a huge pay gap between the badminton referees salaries and other sports.

Weren’t aware of that right? Are you aware of how much does Badminton World Federation (BWF) pays to its officials? What are the salaries of referees and umpires earned in 2022?

You would be surprised to know that badminton is among one of the least paying sports to its officials. The referees in Badminton earn 1/3rd of NFL referees.

Badminton Draws a lot of similarities with Tennis, and rightly so. The layout of badminton is very much similar to tennis just the way of playing the sport is different. Badminton’s one big similarity with tennis is that their allocations of referees are so similar.

Badminton comprises Referee, Umpire, Line Judge, Service Judge, and IRS Umpire. There are so many officials looking after the rules and fair conduct of the match.

However, one huge difference between Tennis and Badminton is the disparity in wages. A Tennis match official earns ($1,600) per match which is way more than a Badminton referee’s wage of ($500) per match.

The salary for the umpires involved in Badminton match.

What’s interesting and surprising to note is that badminton is most dominant in Asian countries especially China. However, the pay gap for the referees and umpires is the same in each country.

While if the referees are selected for the Olympics then their salary gets increased from $500 to $2000.

As I mentioned earlier that there is more than one official officiating in a match of badminton, but what are the roles of these officials?

Disclaimer: The above figures about the badminton umpires and referees salary are based on the analysis, research and reports released by the Badminton World Federation (BWF).