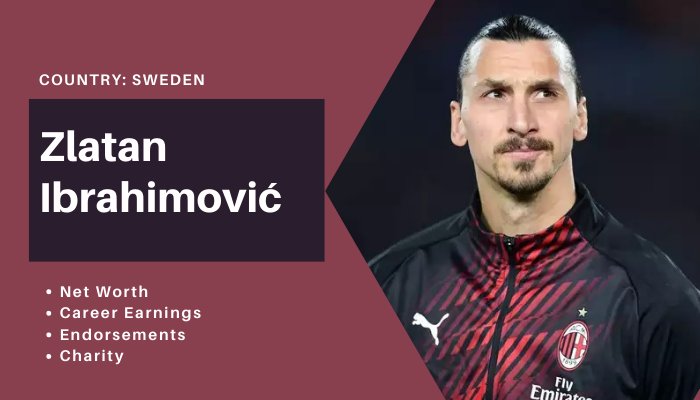 Zlatan Ibrahimović is a Swedish professional footballer who plays as a centre forward for Serie A club AC Milan. Zlatan has played for the best clubs across Europe like Ajax, Juventus, Inter Milan, Barcelona, AC Milan, Paris Saint-Germain, and Manchester United. He has won more than 30 trophies and over 500 club goals over four decades. In 2022, Zlatan Ibrahimovic’s net worth is estimated to be $190 million.

He then moved to Spanish giants Barcelona for £41.40 Million and after a spat with manager Pep Guardiola. The value deteriorated to £33.30 Million when he moved to AC Milan.

Ibra then moved to French Club PSG as a marquee signing where he became a club legend but his value when he left at the age of 34 was £13.30 Million. Signing as a free agent for Manchester United, he 17 goals and exceeded the expectations of the fans.

He left for LA Galaxy when his value was £3.50 Million. His value after signing a new contract extension with AC Milan last week has surprisingly moved to £4.50 Million.

Zlatan is very popular in the footballing circle. He has 47.1 Million followers on Instagram currently. He is endorsed by automobile manufacturer Volvo. He also represents the Technology brand Samsung, the Gambling app Bethard, and a Chewing gum brand “Mind the Gum”.

Zlatan hit back at Electronic Arts with his agent Mino Riola questioning how FIFA 21 uses his image and name without his permission.

Zlatan Ibrahimovic has been with AC Milan since December 2019. The latest contract was signed on 23rd April for an additional year. His current deal will earn him £5 million and additional bonuses of around £1 Million.