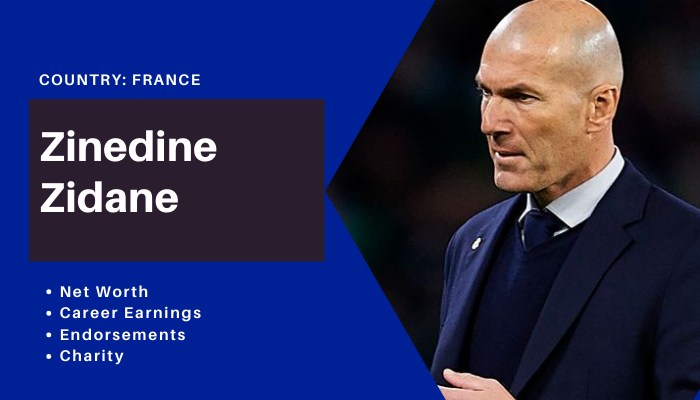 Zinedine Zidane is one of the most immensely talented and successful football personality. The Frenchman currently is the manager of the Spanish giants Real Madrid. He is one among very few footballers who had a legendary career and went on to have an equally great managerial career. The former professional football player, Zidane’s net worth is estimated to be around $120 millions.

Zidane was born on 23 June 1972 in a neighbourhood of Marseille in France. He made his professional debut for French side Cannes in 1989. After three seasons, he was signed by Bordeaux in 1992. He played for Bordeaux from 1992-1996. He played 139 matches for Bordeaux and scored 28 goals.

After a successful stint with the French side, he was signed by Italian giants Juventus in 1996. He had immense success at Juventus for whom he played 151 matches scoring 37 goals. Following his glorious performances for Juventus, Zidane was signed by Real Madrid in 2001 for a world record fee of €77.5 million.

He made his international debut for France in 1994. He played 108 matches for the French national side from 1994-2006 scoring 31 goals. He is arguably one of the best midfielders to ever play the game and exhibited some of the most impressive technique in terms of ball control, the first touch, and passing.

More than anything else, Zidane knew how to read the game, and he had the vision to play perfect balls at exactly the right moment.

Zizou’s base salary at Real Madrid is $14 million per year and Zinedine Zidane’s net worth is estimated to be around $120 million. Zidane is not involved in many sponsorship deals. He endorses companies like Adidas, Orange and Kanakia Group. In April 2016, Orange singed Zidane for selecting the world’s ultimate football fans.

In May 2016, Zidane was appointed as the brand ambassador by India-based Kanakia Group Private Limited to promote its real estate business. He is a UN goodwill ambassador since 2001.

Zidane was a well-decorated player and tasted glory wherever he played. With Juventus, he won 2 Serie A titles, 1 UEFA Super Cup, 1 Supercoppa Italy.

With Real Madrid he won 1 La Liga, 1 Champions League,1 Super cup, 1 Super Copa de espana. Internationally, Zidane was a crucial part of the World cup winning the French side in 1998 and the Euro Cup in 2000. Zizou won the Ballon D’Or in 1998.

Zidane is the only footballer to have equally glorious statistics as a player and manager. He started his Managing career as an assistant coach to Carlo Ancelotti for Real Madrid in 2014. He then managed the Real Madrid Castilla.

Zizou became the manager of Real Madrid in 2016. His first stint at the club was from 2016-2018. His second stint with the club began in 2019 and he still manages the club to date.