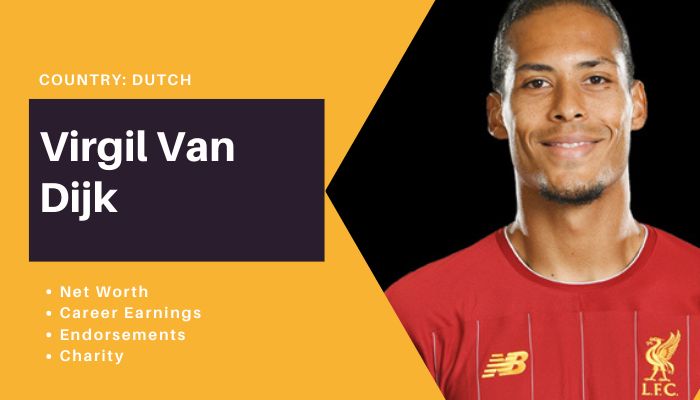 Virgil van Dijk is a Dutch professional football player who plays as a centre-back for EPL club, Liverpool. The Dutch National team captain is considered as one of the ever centre-back to grace the English league since he made a record-breaking move from Southampton to the Merseyside. According to sources, Virgil Van Dijk’s net worth is estimated at £63.00 million as of 2022.

Virgil won the FIFA Club World Cup and UEFA Super Cup and was instrumental in ending the club’s 30-year league title drought by winning the 2019–20 season.

He came close to winning the Ballon d’Or in 2019 when he finished second behind Lionel Messi and finished above Cristiano Ronaldo. He also came as Runner up as the Best FIFA Men’s player. He has won the best player with almost all the clubs he had played.

Currently, Virgil Van Dijk’s net Worth is estimated to be £63.00 million. His value peaked in September 2019 to £90.00 Million, just months after lifting the UEFA Champions League against Tottenham Hotspurs in the finals.

His value in 2014 when he started out with Scottish club Celtic was £3.60 Million. The value has been on a steady rise since then and reached £9 Million in 2015 when he moved to the Premier League in 2015 when he was 24.

The Dutchman’s net worth reached £45.00 million when he moved to the Reds shelled out a record £76.20 million for the transfer.

Van Dijk signed with Video game developers Electronic Arts to be one of the featured stars for the FIFA 20. He is endorsed by sportswear brand Nike.

The club is believed to be preparing an offer to keep him with the club as the contract is expiring in 2023. According to reports, Van Dijk earned £1.80 Million from endorsements deal with Nike & EA Sports in 2022.