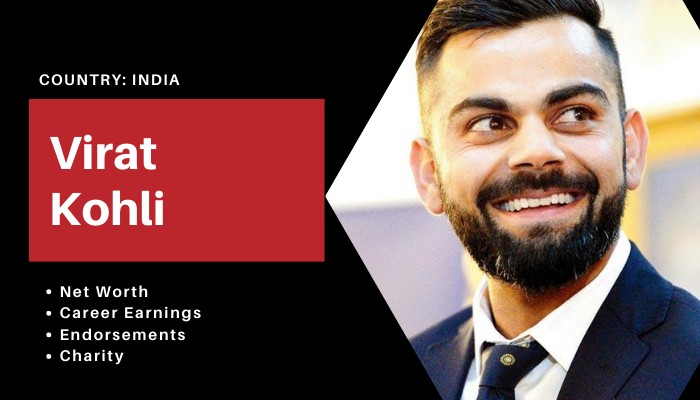 Virat Kohli is presently the poster boy and leading man of Indian Cricket. He has become a global sports icon, a fashion icon, and a business icon, all while playing for India national team on the cricket pitch. He is the third richest cricketers in the world and has become a brand himself. . The 32-year old is breaking every cricket records and settling milestone with every match. India captain Virat Kohli net worth is estimated to be ₹900 crores ($119 million) as of 2022.

The modern great Kohli is the current Indian skipper in all three formats of the game and also the captain for the IPL franchise Royal Challengers Bangalore. No doubt, Virat Kohli is the most popular cricketer of the current era and has established himself as a successful businessman with inhouse brands Wrogn and One8.

The Indian cricketer is one of the highest-paid athletes in the world. As of 2022, Virat Kohli’s net worth is reportedly around 900 crores Indian rupees i.e $119 million.

Virat earned ₹252.72 crores in 2022 and took the number on the Forbes Celebrity 100 list and dethroned Bollywood Superstar Salman Khan, who had maintained the position for the last three years.

Apart from Jasprit Bumrah and Rohit Sharma, Virat Kohli is the only other player who comes under the new A+ category of the BCCI Annual contract, and these three players will get Rs 7 crore. Kohli earns a salary of 7 crore Indian rupees along with a match fee of ₹15 lakh per test match, ₹6 lakh per ODI match, and ₹3 lakhs per T20 match.

He also receives several bonus cash rewards for scoring a half-century, century, or a test double century. He is the highest-paid player in the Indian Premier League (IPL), Kohli salary is ₹17 crore in IPL, playing for the Royal Challengers Bangalore team.

His co-created brand with puma called One8 has already crossed the Rs 130-crore revenue mark and may reach Rs 185 crore by the end of 2022. He also owns a famous youth apparel brand called Wrogn. Kohli has become a huge brand, and that comes with high prices for shoots, he charges Rs.2 crore per day.

Football is Kohli’s second favourite sport after cricket; he is also the co-owner of the FC Goa franchise (he owns 25% stakes), which plays in the Indian Super League (ISL). He also co-owns the ITPL Tennis team UAE Royals.

Virat is a foodie and often reminisces his chubby days when asked about his love for food, he owns a fine dining restaurant called Nueva and also one named One8 Commune in Delhi.

He is also linked with a multi-sport tech-startup based in London called Sport Convo. Virat has always been praised for his high fitness standards; he has set up his line of gyms, named ”Chysel Gym and Fitness Center” with CSE.

Disclaimer: All the facts and figures about Virat Kohli net worth are based on analysis, research, interviews, official statements, reliable sources, and reports released by trusted sources.