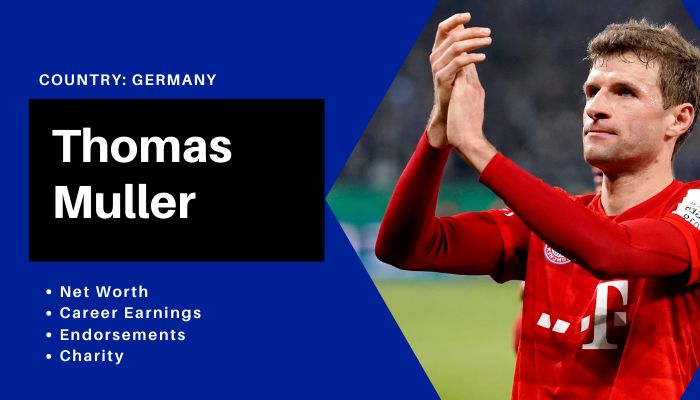 Thomas Muller is a professional football player who plays for Bayern Munich and the German national team. Muller is a player who is known for his creativity and attacking flair. He can play at various attacking positions in the final third of the pitch. According to our reports, Thomas Muller net worth is estimated to be around $22 million.

One of the world’s best footballer, Thomas Muller was born on 13 September 1989. He began his career at Bayern Munich in 2008 and has been at the club ever since. He is ageing like a fine wine and his performances on the pitch are developing as he grows older.

He forms an important part of Bayern Munich’s attack and his contributions have helped the club achieve a lot of success. He is one of the few Bayern players who have been in the side that has won eight back to back Bundesliga titles in a row since the 2012/13 season.

Muller has endorsement deals with Adidas, Gillette, Rewe, Volkswagen, Barilla, Weber-Stephen. He earns around $30 Million from his endorsements. He also does a charity for the foundation called ‘Young Wings’.

Muller is one of the most creative players in the world, known for his technique, positioning and stamina. He is very great offensively and can play at various positions. He plays as a central attacking midfielder but can also shift to the wings and play at a false 9 position.