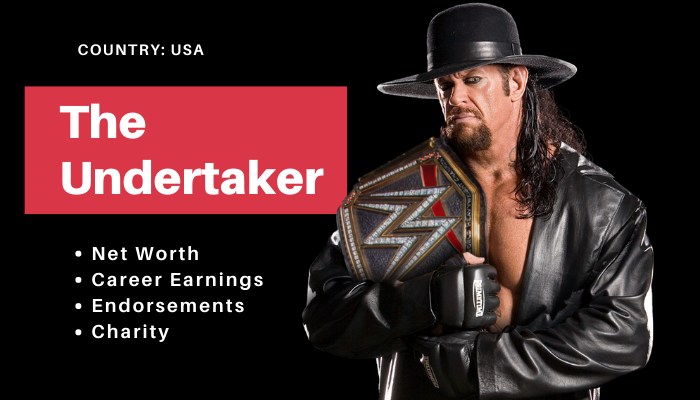 The Undertaker is an American retired professional wrestler who was the face of WWE and a household name from the 1990s. Undertaker had a huge impact on popularizing WWF/ WWE and wrestling in general. The Undertaker has achieved everything inside the ring that also reflects on his bank balance. Mark William Calaway, popularly known as The Undertaker has a net worth of $17.5 million.

The Undertaker Net Worth

According to sources and reports, The Undertaker has a net worth of $17.5 Million. “The Deadman” had a glorious career that made him heaps of money. His earnings have come entirely from his wrestling career.

The Undertaker was one of the hardworking stars in the WWE and went through many changes to be the top wrestler at the company. The annual WWE salary of the Undertaker is estimated to be about $2.5 million.

Undertaker is into Real estate investment. Along with his Business partner Scott Everheart he built a building called The Calahart in Loveland, Colorado. He also makes money from the sales of his merchandise which include gloves, hats, T-shirts.

Undertaker was born on March 24, 1965 in Texas, USA. His real name is Mark William Calaway but he is profoundly known by his professional name ‘’The Undertaker.”

He had a long illustrious wrestling career that lasted for almost 30 years. Mark Calaway made his debut in 1984 at World Class Championship Wrestling (WCCW). His professional name at that time was Texas Red.

Mark became the USWA Unified World Heavyweight Champion in 1989. He later changed his gimmick to “Mean Mark” Callous and took part in WCW (World Championship Wrestling).  Mark made his WWE debut in November 1990, where he appeared as Kane the Undertaker.

Alongside wrestling, Undertaker is also involved in the entertainment and show business. He has appeared in 5 movies and 7 TV shows. Suburban Commando, The Flintstones, Scooby-Doo are some of his movies. Some of his TV shows include Americas Most Wanted. He has also appeared on the covers of WWE video games.

After a prosperous career spanning across three decades, The Undertaker announced his retirement rom wrestling in June 2022.

Disclaimer: All the facts and figures about The Undertaker net worth are based on the analysis, research and reports released by trusted sources.