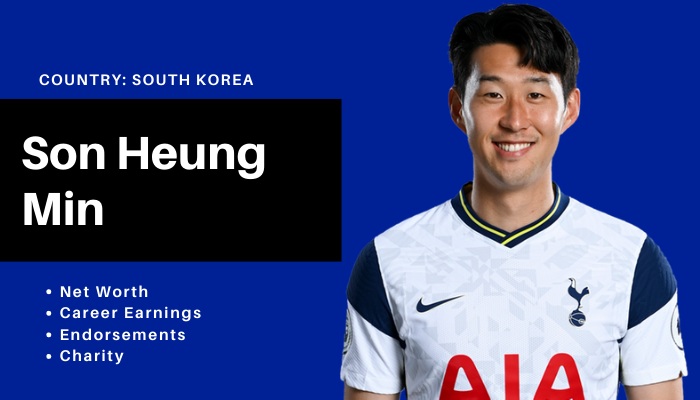 Son Heung Min is a professional footballer who plays for English club Tottenham Hotspur and South Korea. Son is one of the few South Korean footballers who have played in the English Premier League. He has lately developed to become the most important player of Tottenham behind Harry Kane. According to our research, Son Heung Min net worth is estimated at around $20 Million with an annual salary of $6 million.

Son leads the attack in Harry Kane’s absence and both the strikers have a unique connection on the pitch which results in many goals for both of them. Son has played more than 290 matches for Tottenham scoring around 120 goals for them.

Son is a versatile player who can play at any forward position. He is known for his blasting pace on the counter attacks.  He has clinical finishing ability and great vision which make him a creative player who often provides assists.

Son Heung Min was born on 8July 1992 in Chuncheon, South Korea. He began his football career as a young child at youth academy of FC Seoul. He joined German club Hamburger SV in 2010 as a young player.

Son came into limelight when he was signed by English side Tottenham Hotspur in 2015. He is at the North London club since then and now has grown to become a vital and important part of the team.

Son has represented South Korea 89 times scoring 26 goals. He captains the team and  has won a gold medal at the Asian Games with them. He made important contributions when they qualified for the 2018 FIFA World Cup.

Disclaimer: All the facts and figures about Son Heung Min net worth are based on the analysis, research and reports released by trusted sources.