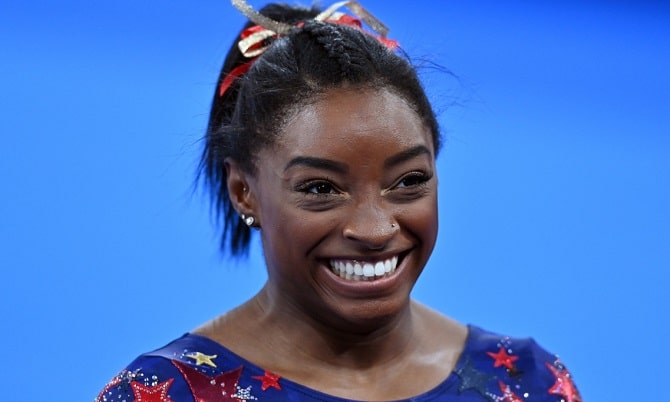 Simone Biles Net Worth 2022: Everything you need to know about the Olympic champion

Simone Biles is an American artistic gymnast. She is the third most decorated gymnast in the world. The 24-year-old has won 31 medals in the Olympics, and World Championship combined. Biles is the most decorated American gymnast. In the ongoing Tokyo Olympics 2022 games, she withdrew from three events due to mental health issues. Here’s everything you need to know about the Olympic champion along with Simone Biles net worth and earnings.

The American has a net worth of $10 million. Her major portion of earning is from Gymnastics only. Apart from representing the United States of America in gymnastics, she also endorses numerous brands.

She endorses brands such as SK-II, Hershey’s, Uber Eats, Candid Dental, Kellogg’s, Mattress Firm etc. Recently, she ended her deal with Nike and joined Athleta as their brand ambassador.

She was born on March 14th of 1997, in Columbus, Ohio. Simone spent her childhood in foster care. Her grandfather took charge and played a key role in her upbringing. From a young age, she was destined to be a gymnast. To focus on her professional career, Simone completed her secondary education in homeschool.

In the year 2011, she participated in American Classic in Houston. Biles finished third in all-around, first on vault and balance beam. Furthermore, fourth on floor exercise and eighth on vault. After 2 years, in 2013, she made her senior international debut. Simone participated in a FIG World Cup event, i.e. American Cup. She finished second in the competition.

She won her first international medal at the City of Jesolo Trophy held in Italy in 2013. At the age of 16, Biles became the first African American to win a world championship medal in the all-around category.

In Rio Olympics 2016, she won gold medals in the all-around vault and floor. In the team event, she won gold for the United States of America.