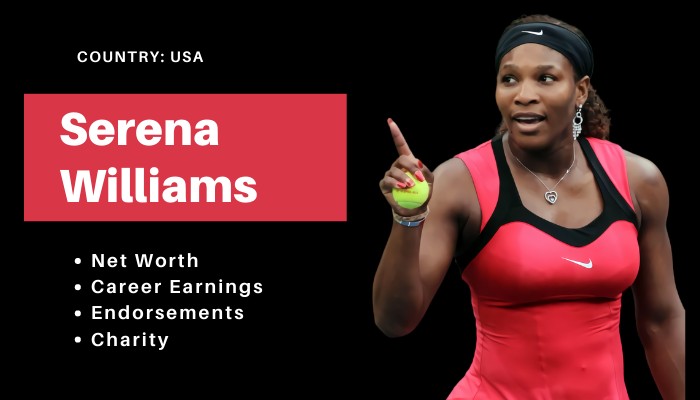 She has achieved almost everything that one Tennis player can dream. She begins her career under the guidance of her sister Venus Williams and father Richard. The Williams sisters were coached by their father after tasting the bad experience of Florida’s Rick Macci Academy in the initial days.

According to our sources and reports, Serena Williams net worth is estimated at $230 million. She earns more than $8 million a year through her tennis career and has won a whopping $93,634,967 as Career Prize money in total. She is listed in the Top 50 highest-paid athletes in the world. The tennis star has earned $36 million in the year 2023.

Serena is the current Chief Sporting Officer for Aston Martin and the director of SurveyMonkey. She has her own clothing lines called Aneres and S by Serena. She is a minority owner of NFL team Miami Dolphins.

Serena Williams has won 39 Grand Slam titles, the second-most of all time. Between 2002-2017, Williams was ranked World no. 1 eight different times. She holds the most number of Grand Slam titles in singles, doubles, and mixed doubles combined among active players. Her record makes her joint-third on the all-time Grand Slam list and second in the Open era.

Disclaimer: All the facts and figures about Serena Williams net worth are based on the analysis, research and reports released by trusted sources.