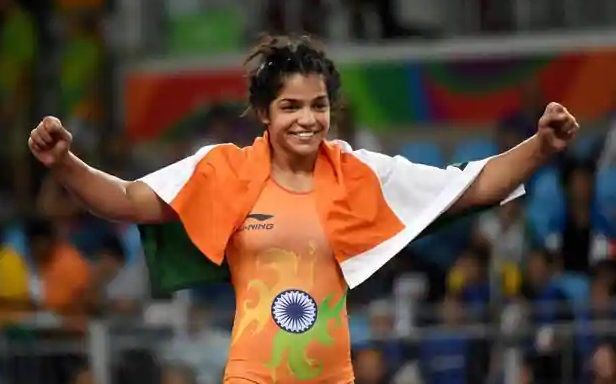 Sakshi Malik is an Indian freestyle wrestler born on September 3, 1992, in the Rohtak district of Haryana, in a village called Mokhra. Sakshi made the nation proud by being the first Indian female wrestler to win a medal in the Olympics. Sakshi won the prestigious Olympic bronze medal in the 58 kg category in the 2016 Rio Olympics.

Malik’s grandfather Badlu Ram was an inspiration to her as he also was a wrestler. She belongs from a middle-class family with one parent working as a supervisor at a local health clinic and one working as a bus conductor in Delhi  Transport Corporation.

When she was just 12 years old, she had started her training under coach Ishwar Dahiya in an Akhara at the Rohtak stadium. She is one of those Indian sportspersons who don’t come under much limelight but keep on winning medals for India. Sakshi’s first taste of success in the international arena was when she won the bronze medal in the 58 kg freestyle event in the 2010 Junior World Championships. She won gold for the first time in the 60 kg category at the 2014 Dave Schultz International Tournament. She further secured a silver medal at the 2014 Glasgow Commonwealth Games. She also claimed a bronze medal in the 60 kg category at the 2015 Asian Championships in Doha, Qatar.

Her greatest achievement came at the 2016 Rio Olympics where she conquered her bouts against Sweden’s Johanna Mattsson, Moldova’s Mariana Cherdivara, but lost to Russia’s Valeria Koblova in the quarter-final. But as Koblova reached the finals, which made Sakshi Malik eligible for the ‘repechage round’ ( in which the wrestlers who lose to the eventual finalists fight it out for the third place), where she won against Pürevdorjiin Orkhon of Mongolia in her first bout.

Sakshi then secured a bronze medal and made history by becoming the first Indian female wrestler to win an Olympic medal when she made a fantastic comeback after trailing 0-5 at a stage but later turned the tables by winning 8-5 in her bout against Aisuluu Tynybekova of Kyrgyzstan.

Sakshi also featured in the second edition of the Pro Wrestling League, representing Colors Delhi Sultans held in January 2017. She is currently training and thriving to perform well at the 2022 Tokyo Olympics.

Sakshi Malik’s estimated net worth is around $1 Million to $5 Million approx.

Though coming from a state which has the lowest child sex ratio (834 to 1000) and most cases of female foeticide, Sakshi has been an advocate for women empowerment throughout her career. Achieving success and bringing laurels to our nation, proving women are the frontrunners of success and in our country.

The Indian Railways employed Sakshi into the commercial department of it’s Delhi division. She was promoted to gazette officer rank after she won the Olympic bronze medal. Malik, along with fellow female wrestlers Vinesh Phogat, Babita Kumari, and Geeta Phogat, is also a part of the private organization JSW Sports Excellence program.

Sakshi got married to Indian wrestler Satyawart Kadian on April 2, 2017. They got engaged just after the Rio Olympics, Satyawart also hails from the same background of wrestling and is a fellow wrestler representing India. They had a big fat Punjabi wedding with more than 1000 guests, including several well-known sports personalities like Olympic medallists Sushil Kumar and PV Sindhu.