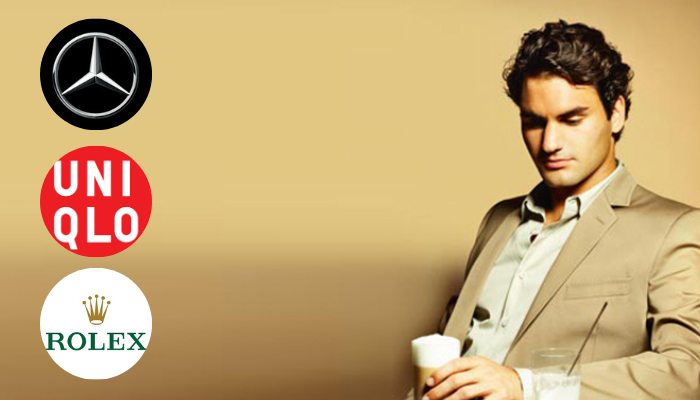 Roger Federer undoubtedly has the strongest brand portfolio in Sports History. The 20-time grand slam champion is the only athlete on the planet after Tiger Woods to earn over $100 million through endorsements and appearance fees in a year. Federer was named the highest-paid athlete in 2022 by Forbes Magazine. Here are popular brands endorsed by Roger Federer in 2022 and makes money from.

The Swiss International became the first tennis player to reach the No.1 rank on the Forbes list. Federer’s Total Earnings were approximately $106.3 million of which 6.3 million came from prize winnings and the rest $100 million through brand endorsements and sponsorships. Right now, Roger Federer’s net worth is around $450 million.

All the brands endorsed by Roger Federer

Wilson is the official tennis racket and kit sponsor for Roger Federer. Wilson has been the 39-year old’s longest-running sponsor, he had signed a sponsorship deal with a Sports Equipment company when he made his professional debut in 1998.

Federer signed a 10-year contract paying him $30 million with Japanese clothing brand Uniqlo for endorsing the brand around the globe.

Roger Federer is linked with Mercedes Benz, one of the greatest German Luxury Carmakers in the automobile industry. He signed an endorsement deal with the German Automobile manufacturers in 2008 and has helped him expand his car collection while pocketing $5 million a year for endorsing Mercedes Benz.

One of the most popular brands Endorsed by the Ace tennis player is Swiss Luxury watch manufacturer, Rolex. Federer earns $15 million a year from his contract with Rolex. The Tennis legend has been endorsing the brand for the past ten years. He is always seen flashing his stylish Rolex watches while lifting his trophies.

Roger also has an endorsement deal with a Switzerland-based financial services company, Credit Suisse. He has a whopping $20 million contract with the company, of which the majority of the money goes to Roger Federer’s charity Foundation which helps children in need in Africa.

As a tennis player, Roger has to travel a lot whether to participate in the French Open or the rest of the grand slams. Roger has a sponsorship deal with the world’s largest private jet company, NetJets. The deal provides Federer with several private jet privileges and also pays him around $4 million annually.

Moët & Chandon is one of the world’s finest and largest French fine winery and champagne producers. And Roger Federer has been associated with the company since 2012, the champagne house had also released a limited edition to celebrate Roger Federer’s 20th Anniversary playing the sport.

Roger Federer is the proud brand ambassador of Swiss appliances developer,  Jura Elektroapparate. Jura is famous for their Swiss quality coffee machines and Roger has several times mentioned how much he loves drinking varieties of coffee.

Lindt is the world’s finest Swiss chocolate brand, and Roger Federer has a sweet tooth so he didn’t miss the chance to represent the company as their brand ambassador. Federer has been associated with a bend for over a decade and earns $7 million a year through his contract.

On Running is a footwear start-up based in Switzerland, and Roger Federer is not only their brand ambassador but has also invested in the company’s future.

Barilla is the world’s largest pasta brand, the company signed an endorsement deal with Roger Federer for reportedly around $45 million.

Rimowa is a German strong durable suitcase manufacturer. They manufacture designer high-quality aluminum premium luggage bags and suitcases. Roger Federer has been associated with the company since 2018.

It is Switzerland’s private telecommunications operator, and they jumped the chance on signing an endorsement deal with their country’s pride Roger Federer offering him $4 million a year.