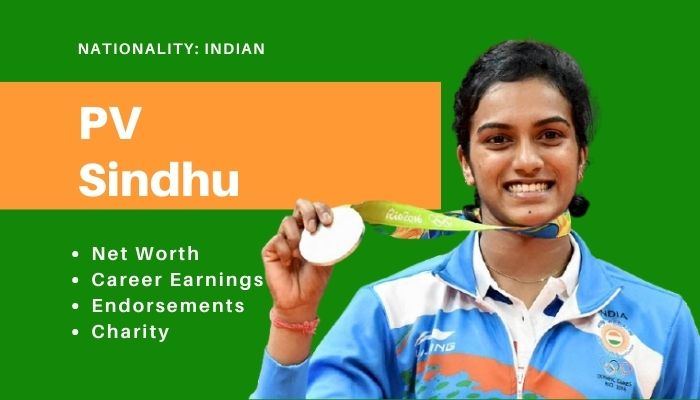 P V Sindhu is an Indian Professional Badminton player. Sindhu is one of the most talented shuttlers in the world and is the face of Badminton in India currently. Success in sports brings with it monetary benefits and helps the players in many ways. Sindhu is among the richest badminton players in the world. The Indian star shutter, PV Sindhu has a net worth of around ₹72 crores ($10 million) and a major source of her revenue is badminton and endorsements deals.

Indian Badminton superstar Star PV Sindhu is carrying the dream of billion people and looking positive to win the medal at the Tokyo Olympics 2023. The world champion has won the silver medal at the 2016 Rio Games.

According to reports, P V Sindhu net worth is estimated at ₹72 crores in 2023. Sindhu is one of the richest Indian athletes and has been featured in the Forbes list of top-rated Asians.

P V Sindhu is ranked second in India in the list of brand endorsement income amongst Indian sportspersons. Sindhu earns the majority of her net worth via her endorsements. She has brand collaborations with JBL, Bridgestone Tyres, Gatorade, Moov, Myntra, Flipkart, Nokia, Panasonic, Stayfree, Boost, APIS Himalaya, Ojasvita, and the Bank of Baroda. She is also a brand ambassador for the Central Reserve Police Force and Vizag Steel.

Sindhu signed a four-year sports sponsorships deal with Chinese sports brand Li Ning in February 2019. The deal is worth $7 million. She will earn $5.6 million from the deal, while the rest will be used for badminton equipment.

PV Sindhu has actively donated and been part of fundraisers and social causes. She donated ₹500,000 each to the state’s of Andhra Pradesh and Telangana during the course of the pandemic.

P V Sindhu is amongst the few successful shuttlers of India. Sindhu began playing badminton at the early age of 8. Since then she went on to become a professional badminton player and went on to represent India at the biggest tournaments. Sindhu became the first Indian female to win an Olympic silver medal in any sport.

Arjuna Award for badminton on 24 September 2013.

P V Sindhu is currently in action at the Tokyo Summer Olympics 2023 and will be eyeing the first-ever Olympic gold medal of her career.