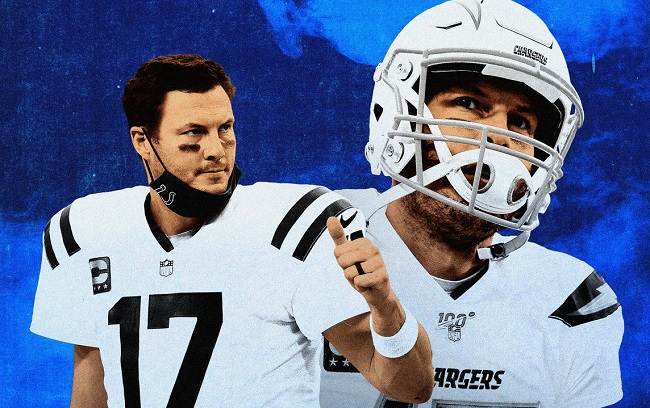 The former Los Angeles Chargers and Indianapolis Colts quarterback, Philip Michael Rivers is the eighth-best with a career passer rating of 95.6 in the National Football League (NFL) history. He has played the entire 16 seasons with the Los Angeles Chargers and his final season for the Indianapolis Colts. An 8-time Pro-Bowler, Philip Rivers net worth is estimated at $80 million.

The quarterback has many records and awards under his belt but yet to achieve the Super Bowl ring. The article will put light on Philip Rivers’ net worth, salary and earnings as well as Rivers’ NFL contracts and sponsorships.

Philip Michael Rivers was born in Decatur, Alabama, on 8th December 1981. He grew up in a highly athletic Roman Catholic family. The local high school football team was coached by his father and his mother was a schoolteacher.

Later, his younger brother Stephen played football in college. During his high school years, he first started playing soccer and was mainly coached by his father. While he became the state’s best prep-passer, Philip played as a quarterback at last.

North Carolina State was the only college that took him seriously as a quarterback. He played under coach Chuck Amato and became the starting quarterback quickly.

Over the last two decades, he has won many awards, including from 2000 to 2004 the Athlete of the Year, ACC Rookie, Player awards, followed by many NFL achievements.

After playing whole his career with Los Angeles Chargers, Rivers played the final season for Indianapolis Colts in 2022. He retired after playing his 17th NFL and now Philip Rivers is all set for a new role as the head coach for St. Michael Catholic High School in Fairhope, AL.

In 2022, Philip Rivers’ worth is approximately around $80 million dollars. The value of Rivers isn’t surprising to a player who has spent 17 seasons in NFL. The bulk of his $80 million fortune traces salaries during his 17-year career.

His salary classifies him in this season as the NFL’s most paid quarterback, based on the contract average salary.

In 2022, Rivers was the 88th highest-paying Forbes player with a 23.4 million dollars profit. Philip Rivers earn $25 million in salary for the 2022 season. He has earned over $200 million through salaries throughout the career.

Rivers has endorsed many popular brands which include Papa John’s, AdvoCare, Bose, and DirecTV.

After playing at the North Carolina State University through four seasons, Rivers entered the NFL draught 2004 and was selected as the fourth overall pick by the New York Giants.

Then he was traded into a pre-arrangement deal to the San Diego Chargers. He agreed to play for the Chargers for six years in August 2004 for $40.5 million.

As this deal came to an end, he signed a contract extension with the Chargers of $91.8 million for six years. He later signed an $83.2 million San Diego Chargers contract in August 2015 for a four-year term.

Following the expiry of his deal with Chargers, he moved to the Colts of Indianapolis, where in March 2022 he signed a $25 million one-year contract.

Philip Rivers earned $243,917,656 of total salaries during his 17 seasons in the NFL. He finally retires from professional football NFL in 2022.

DISCLAIMER: The above information and figures about Philip Rivers net worth and other details are based on trusted sources and media reports. The website does not guarantee the accuracy of the facts and figures.