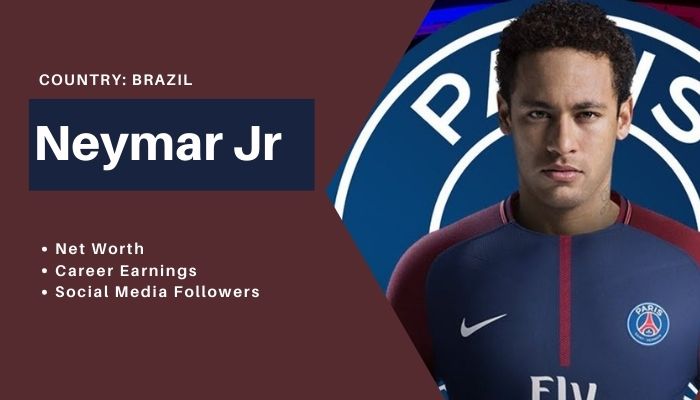 Neymar 2021 – Net Worth, Salary and Endorsements

Neymar Junior may be a name that’s a little less familiar to those who are not that into football, but he is a global superstar and a legend in the making for the many fans of Brazil, FC Barcelona, PSG and the rest of the Football world as well. Neymar’s net worth is estimated to be approximately $200million, with almost 80% of his income coming through his salary.

If you are reading this who is not into football much, remember his name because the Brazilian soccer player is the most expensive transfer signing ever, he was sold to PSG for $263 million and is one of the wealthiest athletes in the world.

Neymar Jr is an icon in Brazil as he is among the top Scorers with more than 50 goals for the national team, and he’s also one of the top reasons why FC Barcelona won the treble in 2014-15 and helped PSG reach the Finals in this year’s Champions League Final.

The famous Forbes magazine ranked Neymar as the fourth-highest-paid athlete in the world in 2020. He is outranked only by his fellow soccer players Lionel Messi and Cristiano Ronaldo, and tennis player Roger Federer.

This year according to Forbes, Neymar earned $96 million, of which $78 million came from his salary and winnings. The other $18 million is from endorsements with companies including Red Bull (which sponsors his worldwide professional football tournament Neymar Jr’s Five), Gillette, McDonald’s, Beats by Dre, and the German sportswear corporation Puma. Don’t ‘holy moly’ yet! Here’s more.

Neymar was the first football player to have his own custom Air Jordan sneakers made by the Swoosh. He has also held sponsorship deals with Volkswagen, Tenys Pé Baruel, Lupo, Ambev, Claro, Unilever, and Santander.

From a very early age, Neymar amazed everyone with his soccer skills, following in the footsteps of his father, a professional footballer, who helped him a lot as he grew up. Currently, his father is his manager. Neymar Jr. started playing street soccer and futsal.

Neymar joined Santos FC when he was just 11 and instantly grew to become an exceptional young talent. He earned his first income with success, which helped his family afford their first property and improve the quality of their daily life.

News about his exceptional talents and abilities flew all the way to Europe, and he was given the opportunity to begin his growth with Real Madrid at the age of 14. Still, his father and team persuaded him to remain in Brazil by offering him a significant compensation.

He signed his first professional contract with Santos FC in 2009, where he sought for excellence and drove on to help them win the 2010 Brazilian Cup.

Neymar possesses the ability to lure in defenders to make fouls. Thus he mainly plays as a striker, winger or attacking No.10 midfielder. Neymar is a phenomenal dribbler and has been compared to the likes of Brazilian legend Ronaldinho, Ronaldinho himself vouched for Neymar as the next big thing in football.

The young Brazilian can cut and dribble towards the centre of the box, thanks to his exceptional playmaking skills, opponent awareness and energetic pace. Neymar’s skills with the ball have even drawn a few comparisons with the likes of Ronaldo and Messi.

The Copa Libertadores victory for the club was their first championship in the competition since Pelé was on the squad in 1963. Later that year (2011), he was awarded the first of two consecutive South American Footballer of the Year Awards.

He joined FC Barcelona in the summer of 2013 and signed a deal until 2018. In Barcelona, among other competitions, Neymar helped the club win the La Liga title, the domestic cup, and the Champions League.

In 2016 he signed a contract extension with FC Barcelona, which included a EUR 200 million release clause. In 2017, PSG paid EUR 222 million (around $246 million) for adding the phenomenal Neymar to their ranks, breaking the highest ever transfer fee of all time.

He is currently under contract until 2022 with PSG and receives more than $350 million in salary.

Here’s a quick summary of the Neymar’s football career: