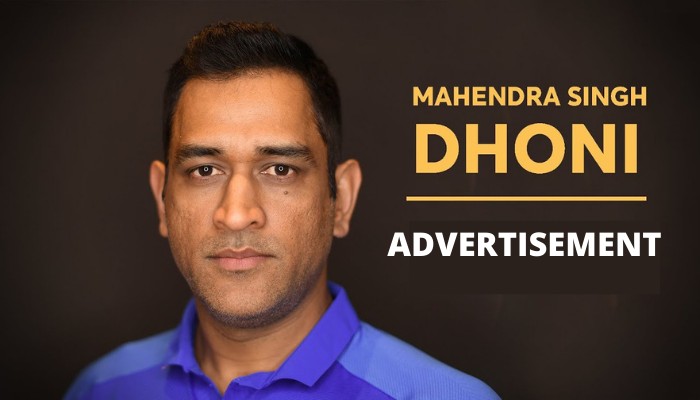 By Siddharth Muruga Last updated May 1, 2021

MS Dhoni Advertisement List: Mahendra Singh Dhoni is a former Indian international cricketer who captained the Indian national team and currently captains the Indian Premier League side Chennai Super Kings. Dhoni is one of the most celebrated cricketers of all time and is known for keeping his calm composure even intense situations.

Dhoni has endorsed more than 30 brands, owns multiple successful businesses, and even does farming in his hometown Ranchi. Let’s look at some of the popular brands that Mahendra Singh Dhoni has endorsed.

Fantasy Sports brand Dream 11 roped in Dhoni since the start of 2018 along with many other Indian superstars.

Web hosting company GoDaddy featured Dhoni in their advertisement in 2018 and again joined hands in March 2022.

Thala Dhoni signed with the Energy drink Coca-Cola Powerade In June 2019 and was the face of the promotion of #PowerThrough.

Cars24 managed to be rope in MSD in August 2019. Dhoni has also announced capital infusion as a part of a Series D round of funding for Cars24.

Captain cool was signed by the online poker portal Pokerstars as their brand ambassador in July 2022.

Indian-based garment giants- Indian Terrain managed to be in Dhoni in May 2019.

Dhoni was made the brand ambassador for the matchmaking site Bharat Matrimony in November 2018.

Dhoni was signed by the Chinese smartphone brand and even launched a Special edition phone with Dhoni’s signature at the back in 2022.

Dhoni was signed by Italian watchmakers Paneri in December 2018.

Captain cool signed with Chocolate manufacturers Snickers in 2018 and donned ‘Bahubali’ getup for an advert.

The leading FMCG brand Colgate brought in MS Dhoni on board in March 2019.

Dhoni was signed by the steel manufacturers SRMB TMT in February 2018.

In 2012, Dhoni launched a chain of gyms and fitness centers which is now across India.

Dhoni has a long-standing partnership with sportswear brand Reebok.

MSD was signed by Boost to replace the legends Sachin and Shewag as the face of the GSk’s milk nutrition brand.

Dhoni was the face of Pepsico India for nearly a decade since 2005 and famously featured in the 2011 World Cup advertisement for the soft drink company.

Dhoni launched his own brand ‘Seven’ in February 2016 and endorses even his current franchise CSK.

Amity University roped in Dhoni in 2013 which was his only association with an educational institute.

Australian-based sports gear manufacturers signed with Dhoni in 2013 but defaulted over ₹20 Crores.

In 2005, Dhoni was brought in to endorse their then-new model Star City motorcycle.

The CSK captain was made the brand ambassador of Exide Life Insurance in 2016.

Dhoni was signed in 2006 with Videocon D2H and featured in an advertisement with Shah Rukh Khan.

Dhoni was appointed Vice-President of The India Cements Ltd in 2013. India Cements is also the major stakeholder of the Chennai Super Kings franchise.

Potato chips varieties signed dhoni as a part of their face along with other International cricketers.

Indian blended fabric and garment-manufacturer made Dhoni the face of their products.

Club soda advertisements were made with Dhoni in various commercials for Mcdowell’s.