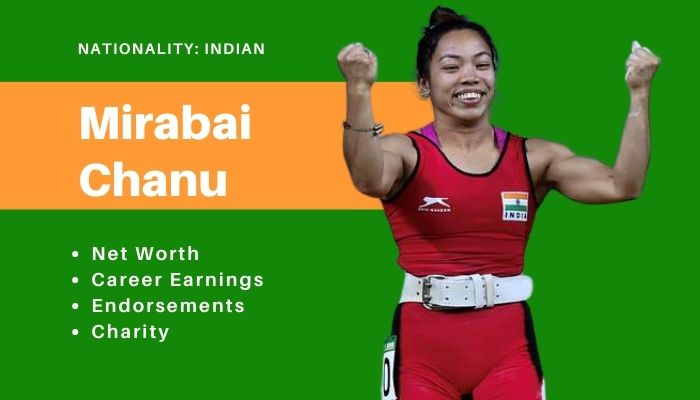 Mirabai Chanu Net Worth: Everything you need to know about the Indian Olympic Silver medalist

Mirabai Chanu became the first-ever Indian medalist at Tokyo Olympics 2022. She won the silver medal in the weightlifting 49kg category. The win was all the more special because he had a disappointing display at the 2016 Rio Olympics. Mirabai became the only second Indian weightlifter after Karnam Malleswari (bronze medal at 2000 Sydney Olympics) to win an Olympic medal. Mirabai Chanu net worth is likely to increase after his biggest achievement.

After her splendid performance, she has become a national hero. Here is everything you need to know about Mirabai Chanu that includes her net worth, career and professional record.

The net worth of Mirabai Chanu is estimated to be $0.14 million, i.e. 1 crore in Indian currency. The major source of her income is from endorsements and personal investments. After her triumph at Tokyo Olympics 2022, she will be facilitated with an Rs. 1 crore cash prize by the Government of Manipur.

She was born on 8th August 1994 in Imphal, Manipur. From a young age, she was strong and courageous. Mirabai got her first breakthrough when she won the silver medal in the 48kg weight category at the 2014 Glasgow Commonwealth Games. Then she qualified for the Rio Olympics but couldn’t perform well.

In 2017, she became the world champion in the 48kg category by lifting a competition record 194 kg in total (85 kg snatch and 109 kg clean & jerk) in the 2017 World Weightlifting Championships held at Anaheim CA, United States. Mirabai holds the world record of lifting 119kg in the clean and jerk.

Before the 2022 Tokyo Olympics, trained in the USA under strength and conditioning coach Dr Aaron Horschig, she treated her injured shoulder simultaneously. From the USA, she went to Tokyo for the Olympics games. Mirabai was probable to finish at the podium, and she didn’t disappoint. She lifted 87kg in snatch and 115kg in clean and jerk – 202kg in total to win the silver medal.